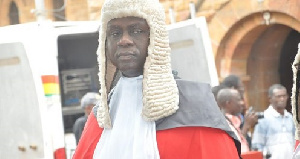 Anin-Yeboah nominated as next Chief Justice

JoyNews correspondent, Kwei Parker-Wilson reports that the First Deputy Speaker, Joseph Osei Owusu, has referred the letter to the Appointments Committee of the House.

If approved, Justice Anin-Yeboah, who is the fourth longest-serving Justice of the Supreme Court, will succeed Justice Sophia Abena Boafoa Akuffo, who retires on December 20, 2019.

Justice Anin-Yeboah, a well-seasoned law enforcer, was appointed to the Supreme Court by former President John Agyekum Kuffuor in June 2008.

In addition, he is a part-time lecturer in Civil Procedure and the Ghana Legal System at the Ghana School of Law.

Apart from being a Supreme Court Justice, Justice Anin Yeboah is also a part-time lecturer in Civil Procedure and the Ghana Legal System at the Ghana School of Law.

Justice Anin Yeboah’s name is also associated with football. In May 2017, he was appointed the Chairman of the Disciplinary Committee of the Federation of International Football Associations (FIFA).

He also served as the Chairman of the Appeal’s Committee of the Ghana Football Association from 2004 to 2008.

Previous Ogyeahohor Yaw Gyebi II removed as chair of House of Chiefs committee
Next One more killed, another injured in Shaanxi mine accident