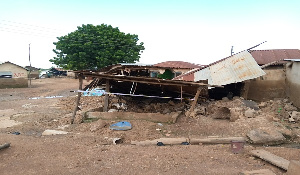 Some 124 people have been displaced by rainstorm that struck the Adaklu-Kpogadzi area in the Volta Region on Sunday, February 14, ripping the roofs off 30 buildings and causing extensive damage to property.

The affected persons, now living with relatives and friends, are appealing for support to reroof their buildings. No casualty was recorded.

Mr Nicholas Amanfu, the Adaklu District Director, National Disaster Management Organisation (NADMO), who visited the community on Monday, advised the people to plant trees to serve as a windbreak.

He entreated them to always consult the Physical Planning Department of the Assembly for technical advice before putting up buildings.

He appealed to organisations and philanthropists to support the NADMO to resettle the victims.

Mr Prosper Agbo, a victim, said aside the roof of his building being ripped off, his farm had been inundated, with some electric poles destroyed leaving some areas in darkness.