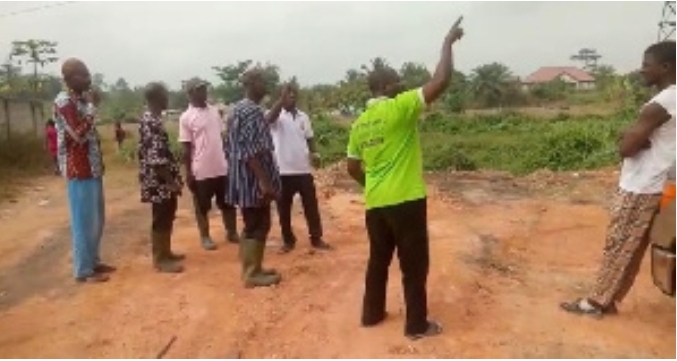 Share
The youth of Mempeasem in the Assin Fosu Municipality of the Central Region have clashed with the Chief of the area over his alleged attempt to sell the cemetery in the area to a private investor.

The youth said they only got to know of the development when they were at the cemetery for burial and “discovered that a bulldozer was busily clearing parts of the cemetery lands”.

When asked who gave the cemetery land out, Nana Aseku-Brempong who is the caretaker chief of Mempeasem-Konsontre was allegedly mentioned by workers of the investors.

According to them, the Benkumhene of Konsontre had allegedly sold 100 plots of the cemetery land to a Nigerian resident at Assin Kushea.

The angry youth numbering about 50 then stormed the palace of Nana Aseku Brempong to warn him to stay away from the land or incur their wrath.

“We will chase the chiefs if they make any attempt to sell the cemetery land,” the Youth leader, Abdulai Salifu said.

They also sent a stern warning to any developer with the intention of putting up a structure on the cemetery land to stay off since they will do all within their power to stop it.

But, admitted that he only led the investor to the land under the directives of his superiors.

Previous LIVESTREAMING: E-Levy on, speaker out, another likely parliament showdown?
Next Angry traders at Circle clash with ‘Operation Clean Your Frontage’ team