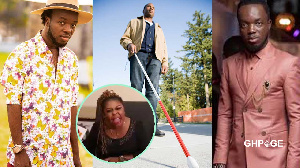 Information reaching this portal has it that the brother of songwriter and musician Akwaboah has gone blind days after a man of God dropped the prophecy.

Few days ago, reports were rife a pastor identified as Prophet Eric Boahen, had revealed that Akwaboah and his brother had been cursed by a lady.

According to the prophet, the lady’s demands are only for Akwaboah to go blind, get involved in an accident and lose his son to the icy hands of death.

Well, a new post shared on Instagram by controversial Afia Schwarzenegger tends to indicate the curse has started manifesting.

From the video, Prophet Eric Boahen during a prayer session in his church gave the same prophecy and said four evil spirits have actually held on to the curse by this unknown lady and are always following Akwaboah and his relatives.

According to Afia Schwarzenegger, she has had a conversation with the said lady and she can confirm that Akwaboah’s relative has already had an impact from the curse.

Prophet Eric at the later part of his interview with Zionfelix indeed confirmed that after his prophecy, the younger brother of Akwaboah called him on phone crying that their brother has been blind within these few weeks.