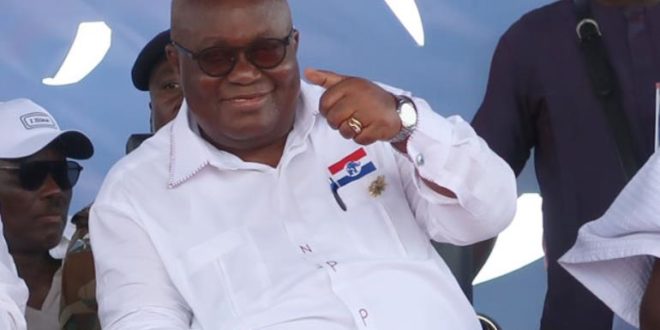 Flagbearer of the ruling New Patriotic Party (NPP), President Akufo-Addo, and three others are expected to file their completed nomination forms at the headquarters of the Electoral Commission (EC) today, Tuesday, October 06, for the 2020 Presidential Election.

The others are the leader of the Ghana Freedom Party (GFP), Akua Donkor, Dr. Hassan Ayariga of the All People’s Congress (APC), and Jacob Osei Yeboah, an Independent aspirant.

A source at the EC who disclosed this to the Ghana News Agency, said Dr. Tom Asisseh, an Independent aspirant, and Kwesi Busumbru of the People’s Action Party (PAP) are expected to file on Thursday, October 08.

The nomination forms will be submitted to Jean Mensa, the Chairperson of the EC, who is the Returning Officer for the presidential elections.

The aspirants are expected to visit the Commission between 9am and 5pm to file their nominations.

The EC on September 15, 2020, opened nominations for parliamentary and presidential aspirants ahead of the 2020 General Election.

Due to the COVID-19, aspirants are to download the forms online, as a measure to contain the spread of the virus.

The EC Chairperson, at a press conference to announce the opening of nominations, said the forms were protected with passwords to ensure the integrity of the process.

The Chairperson said: “The forms are to be submitted in quadruplicates. The forms shall be submitted at the headquarters of the EC by candidates or their supporters.

“In view of the COVID-19 pandemic, the Commission has limited the number of persons to submit the forms at the headquarters or district offices…five persons per candidate.

She said, “The forms for the parliamentary candidates shall be submitted to the Returning Officer of the Constituency to, which the Candidate seeks election at the District Office of the Electoral Commission.”

Presidential aspirants for the 2020 general election are required to pay a filing fee of GHC100,000 and GHC10,000 for parliamentary aspirants.

The EC said presidential candidates who attained 25 per cent of total valid votes cast would have a refund of their filing fees.

The Commission said, for parliamentary candidates, refund would only be given to those who attained 12.5 per cent of total valid votes cast.

It said there would be no refund for aspirants whose nominations were disqualified.