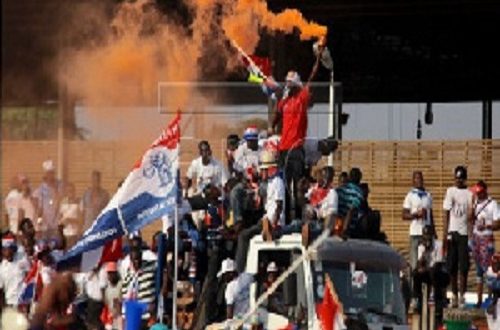 The Youth Organizer of the New Patriotic Party (NPP) in the Dome-Kwabenya constituency, David Obiri Yeboah has accused the constituency secretary of printing an album without authorization.

The NPP’s executive says the album which was printed was exhibited to have delegates in the constituency check their names as the party readies to organize its parliamentary primaries.

Mr. Yeboah, who is supporting the bid of the incumbent MP, lawyer Sarah Adwoa Safo told Kwabena Agyapong on Rainbow Radio 87.5Fm claiming the secretary and some other party executives formed an election committee, printed the album and held an exhibition for delegates to check their names despite the suspension of all party activities following the ban on social gatherings.

David Obiri Yeboah said the decision led to confrontations between the supporters of the incumbent MP and the contender, Mike Oquaye Junior who he said is being supported by the secretary and other executives.

He further alleged that the secretary asked the 18 coordinators in the constituency to sign the album. However, one of them has taken custody of the album.

He said the album will not be the one to be used for the election and any attempt to have the names of delegates deleted from it would be fiercely contested.

“Nobody has the right to delete the name of any delegate from the album,” he stressed.

The NPP organizer opined delegates and residents in the area are rooting for the incumbent MP due to what he described as a ”remarkable achievement”.

The MP he explained has become the favourite of the people hence it would be prudent for the party to file her as the candidate in the 2020 parliamentary race.

He said he has decided to support the MP because he is of the view she remains the best for the party.

However, for some personal interest, some of the party leaders in the constituency including the secretary are trying to thwart the efforts to make the incumbent win, he asserted.

When asked why party leaders are supporting candidates in the upcoming primaries he said, he cannot be neutral but can only be fair. Despite being an executive, “I have taken a stance to support the MP. The secretary has decided to support Oquaye Junior. If you think someone is capable of winning and support the person, there is nothing wrong with it. I think Adjoa Safo will win and that is why I have decided to support her.”

He also underscored the need for women in parliament to be retained since they are few.

The MP he added has demonstrated that women are capable and competent when given the nod.