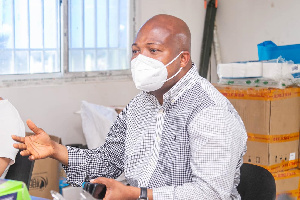 Samuel Okudzeto Ablakwa, Member of Parliament for North Tongu, has posed seven questions to government relative to the failure of authorities to detect the re-entry into Ghana of notorious illegal small-scale mining, galamsey, kingpin; Aisha Huang.

Ablakwa is particularly disturbed by the wider national security implications of the development at a time Ghana has stated its readiness to combat terrorist threat in the West African subregion.

In a social media post dated September 5, 2022; Ablakwa likened Huang’s undetected reentry to ‘dribble of the security apparatus’ and ‘hot knife through butter.’

“Aisha Huang has in a spectacular fashion exposed all the grand claims by government officials and national security operatives that they are ready with well-equipped and modern sophisticated systems to combat terrorism.”

Ablakwa insists that the government or Parliament must institute a probe into the issue before posing seven questions that needed to be answered relative to the issue.

The questions are as follows:

2) If she was deported, what were the terms — what deal did our government make with their Chinese counterparts?

3) Why wasn’t her biometric features shared with the intelligence community in the subregion to prevent her from using neighbouring countries as a launch pad and an entry point?

4) Who are her collaborators in “high places” as she couldn’t have pulled this off alone?

5) Why is our government not protesting to the Chinese authorities for seemingly facilitating the atrocities of their national?

6) Who were the immigration officials on duty the day she allegedly re-entered Ghana?

7) Why should those in charge of national security keep their jobs after this?

Huang was rearrested recently and arraigned before a court on September 5. The National Security is said to have taken over the case because of its sensitivity, the Immigration Service have confirmed.

The Attorney General’s office have also called for the docket on the matter with AG Godfred Dame reported to have stated that Huang will face charges for her previous and current crimes.

She was deported in 2018 after the state discontinued a case against her for engaging in galamsey. She returned to the country and was engaged in galamsey-related businesses until her arrest. She reportedly entered the country with a new name, Huang Fe.

Previous Works begin on footbridge that collapsed during commissioning at DR Congo
Next Chief of Hwakpo, thugs attack, pour urine on gong beaters