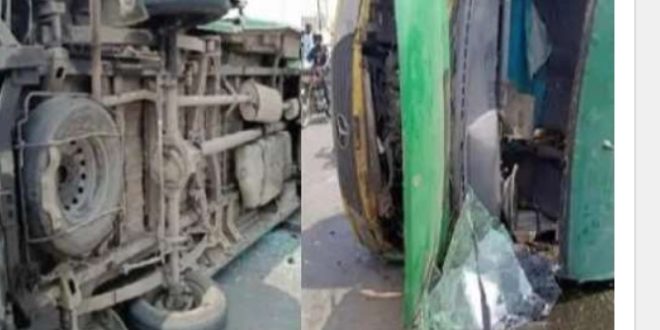 Share
At least two people have been confirmed dead following a fatal car crash that occurred at the Mudor traffic area in the Greater Accra Region on Sunday, March 13, 2022.

According to the information gathered, the deceased on board a Mercedes Benz bus crashed with a Toyota saloon car at the traffic light intersection.

Eyewitnesses say the non-functioning of the traffic light at the intersection caused the accident.

Aside the two passengers of the Mercedes Benz bus that lost their lives, several other people sustained various degrees of injuries and had to be taken to the Korle-Bu Teaching Hospital for medical care.

Meanwhile, the two that died were later conveyed to the Korle-Bu Teaching Hospital mortuary for preservation.

The accident at Odododiodio is just one of several recorded over the weekend.

One that occurred near Nkawkaw on the Accra-Kumasi highway left five people dead. Meanwhile, nine students of the University of Education Winneba (UEW) also died from an accident that occurred at Asuboi, a community along the Accra to Kumasi Highway.

Previous Hilarious video of linesman ‘getting lost’ in Kotoko, Gold Stars game trends on social media
Next SAD PHOTOS: Bride in coma after groom crashed to death on his way to their wedding