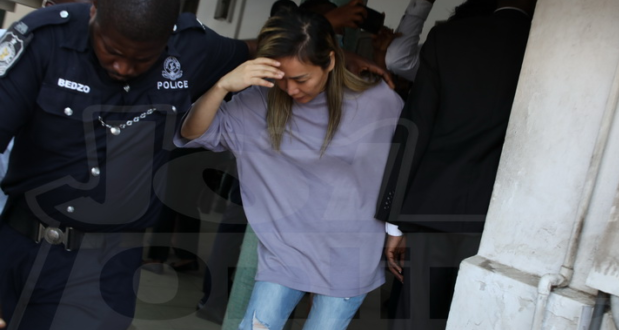 Ranking Member on the Committee on Foreign Affairs in Parliament, Samuel Okudzeto Ablakwa, has said galamsey suspect, Aisha Huang, did not sneak into Ghana as purported.

Mr Ablakwa, who doubles as North Tongu Member of Parliament (MP), claims Madam Huang since February 2019 has been making multiple trips to Togo and Ghana.

“The Akufo-Addo/Bawumia government ought to have known about her multiple travels between Ghana and Togo at a time we were told she had been deported to China because expert forensic analysis we have conducted on Ghana Immigration Embarkation and Disembarkation Stamps in her Chinese passport using the latest version of the globally acclaimed Video Spectral Comparator (VSC 8000/HS) confirms that all the Ghana Immigration Embarkation/Disembarkation Stamps in her passport are genuine,” the MP said.

According to Mr Ablakwa, she went through immigration checks on all of these trips.

The controversy surrounding Aisha Huang’s departure from Ghana started when President Nana Akufo-Addo cast doubt on whether she was indeed deported.

But court documents filed by state prosecutors, however, told a different story following her re-arrest and appearance in court on September 14, 2022.

Detective Chief Inspector Frederick Sarpong indicated that Aisha Huang sneaked out of the country to avert her prosecution, claims her lawyer, Nkrabea Effah-Dartey has vehemently dismissed.

But in a Facebook post, the lawmaker said his investigation has proven that Aisha Huang did not sneak into Ghana but has been boldly walking through in the full glare of immigration authorities since 2019 when Ghanaians were told she had been deported.

“Our irrefutable investigations reveal that Aisha Huang physically presented herself to Ghana Immigration officials at the Aflao border on February 27, 2019, and on April 28, 2019,” Mr Ablakwa wrote.

To the lawmaker, despite changing her names and different dates of birth on her multiple passports, it is most bizarre that Aisha Huang’s biometrics did not raise alarm at the Aflao border immigration post.

“We can state authoritatively that Aisha Huang uses at least 2 Chinese Passports for her travels. One passport bears the name Huang En with passport number: G39575625. It was issued on January 14, 2010.

“Her other passport has the name Huang Ruixia. Its number is EE9994609. This particular Chinese passport was issued on January 14, 2019; Strangely, both passports have different dates of birth,” he added.