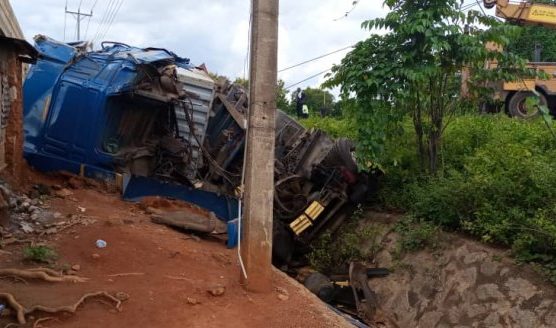 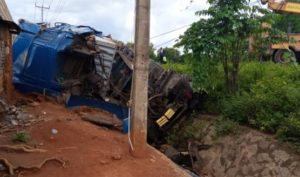 Information gathered from Adensua, a farming community near Kwahu Fodoah in the Kwahu West District of the Eastern Region of Ghana indicates that two heavy trucks have been involved in an accident in the early hours of today, June 30, 2021, between 5:00 – 6:00 am.

The eyewitness disclosed to William Ofori Akwaboa on phone that one of the vehicles with registration number GM-6445-14 was packed and was in waiting for a mechanic to fix the developed fault at Adensua.

However, the other incoming truck from Accra, with registration number AS-9451-14 heading towards Kumasi incidentally crashed into the back of the faulty truck and in the process, the driver sustained severe injuries in the head and bruises on his left arm, while blood was running through his nose.

Ironically, the incoming container truck veered off the road and the 20 feet container fell on the process, and residents of Adensua immediately rushed to the scenes and conveyed the injured person to Nkawkaw Roman hospital.

Meanwhile, the driver and mate of the faulty truck were far asleep under the vehicle when the accident occurred, but fortunately, none of them was hurt in the process.

He opined that the Police were invited to the scenes to immediately toll the trucks to safety to pave way for other cars and road users to proceed to their destinations.

The police are yet to come out with a report on the cause of the accident.