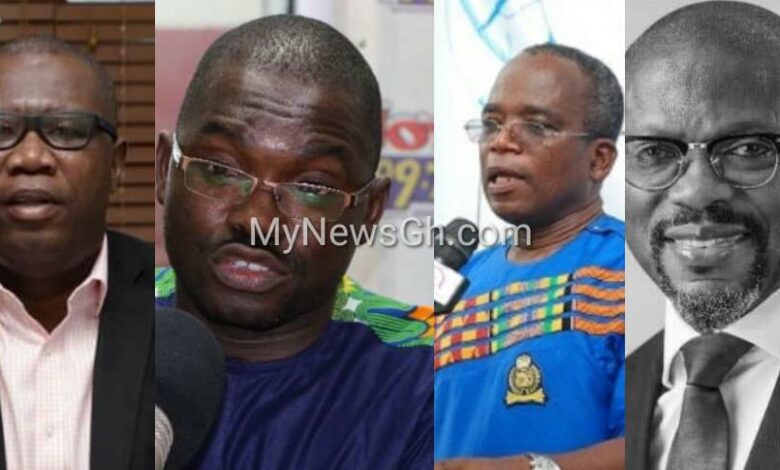 Several notable Ghanaian Journalists have been recognized and been elevated to new jobs under the Akufo-Addo government for various reasons that include their professional qualifications among others while others are alleged to have been rewarded for party ‘jobs’.

Whereas some of the jobs are direct appointments such as Board Chairmanship or membership, some of them are jobs for which the journalists were recruited for, sometimes, allegedly, with the approval of the top.

Under the NDC, some journalists also abandoned the microphone for appointments of various forms.

MyNewsGh.com has compiled a list of names that have readily come up as journalists who have grabbed juicy jobs under Akufo-Addo and Bawumia.

On top of the journalist appointees of President Akufo-Addo is Kwame Sefa Kayi who only days ago was appointed to the National Petroleum Authority Board as a member.

He is a host of Peace FM Kokrokoo, a program the NDC continues to boycott due to its alleged bias against the party.

Kwabena Kwakye who worked as an Oman FM Parliamentary and Presidential correspondent was appointed to the board of the Ghana National Petroleum Corporation (GNPC) in 2017.

Kwabena Kwakye is also the host of the popular Boiling Point political talk programme aired on Accra based Oman FM on Tuesdays and Thursdays.

The Board is chaired by the New Patriotic Party’s (NPP) National Chairman, Mr Freddie Blay with other members as Mr K.K. Sarpong, Managing Director of GNPC.

The second is Akufo-Addo’s appointment of columnist and Director of Newspapers of Graphic Communications Group Yaw Boadu Ayeboafo as a Presidential staffer and later to the NMC’s Board by President Akufo-Addo as the reason for his resignation.

Mr Ayeboafo appointment at Graphic generated some rancour as he worked under Mr Ken Ashigbey at GCGL but per his appointment by the President to the NMC Board, it meant Ashigbey would be answerable to the columnist at some point which turned the issue into a personal matter, contributing to resignations.

Thirdly, and perhaps most noticeable, is Kwaku Addo Sakyi-Addo’s appointment by Akufo-Addo as the Chairman of the Board of the National Communications Authority.

His role as NCA Board Chair and radio host at pro-government media outlet Asaase has been criticised by some analysts.

He is a recipient of the Order of the Volta, one of Ghana’s highest honours in 2008. He is a two-time Journalist of the Year award winner (1986 & 1996). Mr. Sakyi-Addo is currently a Partner at Activate Africa, a strategic communications company in Accra. He is also Executive Producer and Presenter of The Lounge, a unique talk programme broadcast from a live bar on radio and TV. He was the founding CEO of the Ghana Chamber of Telecommunications from 2011 – April 2017. Prior to that, Sakyi-Addo was General Manager (Communications) of Aqua Vitens Rand, a Dutch-South African company awarded a management contract for the state-owned Ghana Water Company from 2007 until 2011.
He was correspondent for the BBC from 1994-2007 and for Reuters, the world’s largest wire service from 1998-2007. He also hosted The Front Page, a must-listen weekly current affairs talk programme on Joy FM for 16 years (1995 – 2011), and was Presenter and Executive Producer of ‘Kwaku One-on-One’, a personality interview show on television for nearly 10 years until 2010.

Egbert is the publisher of the Ghanaian Observer Newspaper. He had previously worked for the Independent Newspaper.

After graduating from law school, he worked with lawyer Yoni Kulendi after which he moved on to establish his own law firm Faibille & Faibille.

Mr. Paul Adom-Otchere is a controversial but seasoned journalist in Ghana who has worked in both TV and radio over the last 20 years covering all major events in Ghana as well as events that occur abroad but are related to Ghana. He was appointed to the NCA Board chaired by his fellow Journalist in 2017.

Otchere has had a stint with the BBC covering the UK election in 2001 for the African Service.

Paul trained as a lawyer but with separate backgrounds in Political Science and Classics. He studied at the University of London’s School of Oriental and African Studies (SOAS) from 2006 to 2008. Before his appointment to the NCA Board, he had founded what he called ICT Chamber, where he led an advocacy forum on Spectrum Allocation in Ghana.

Mr. Adom-Otchere was adjudged the Best News Reporter by the Ghana Journalists Association in 2001.

He is often criticised for biased editorials that are favourable to the NPP.

Fiifi Boafo temporarily quit his job at Oman FM for a new appointment at Ghana COCOBOAD as manager in charge of the CEO’s office at the company. Oman FM is said to have granted Boafo years of leave to enable him take up the COCOBOD job. Oman FM was one of the major platforms the New Patriotic Party (NPP) used to rally its supporters and propagate its messages ahead of the 2016 elections. Boafo’s top appointment is an indication that the new government appreciates his contribution to the 2016 victory. NPP footsoldiers praise Fiifi Boafo as a helper.

Mr. Malik Daabu who for years was a known figure at Multimedia Joy FM joined the Ghana Maritime Authority as the head of Public Relations. Until his new role at the Ghana Maritime Authority, he was the editor of the online department Joy FM and . He also served as Joy FM’s in-house political analyst and was also moved to head the investigative desk following the resignation of Manasseh Azure Awuni from the Multimedia group.

Previous We sympathize with students but we must fight for our welfare – UTAG
Next Father, Son crushed to death in an accident at Wa