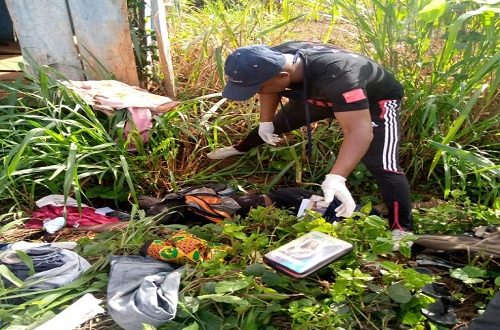 A 46-year-old suspect, Akwasi Chocochoco is on the run after allegedly slashing his wife to death in a bush.

The unfortunate incident which happened at Adumasa in the Juaben municipality of the Ashanti region is believed to have occurred on Saturday, May 1, 2021.

According to an eyewitness, the deceased, the late Akua Afriyie and her husband who are married with six children had not been at peace in the last three (3) years.

A source disclosed that the duo are frequently separated whenever there was a misunderstanding, and after a period, they settled their differences as husband and wife.

But a thorough investigation into the incident has however revealed that the husband had recently accused his wife of having an affair with another man.

Akwasi Boakye, brother of the deceased told GhanaWeb the couple as usual prepared themselves to go to the farm but the husband who was busily sharpening his cutlass told the wife to take the lead for him to join her soon.

“We were alarmed when the two did not return from the farm. We, therefore, informed elders and chiefs of the town through which a Police report was made”.

Upon a search in their farm, it was discovered that the late Akua Afriyie had been slaughtered to death with cutlass wounds all over her body whiles the husband is allegedly on the run.

Several calls to reach him have proven futile as his phone has been switched off since the incident occurred.

The body of the deceased has since been conveyed by the Police at the Konongo Hospital morgue for an autopsy and further investigation still ongoing.

Tags after HIS man murdering on RUN THE wife

Previous Madina youth protest against sale of community land
Next VIDEO: “The Sh!t Is Showing Off” – White Man Says As Afia Schwar Walks Nak3d In U.S