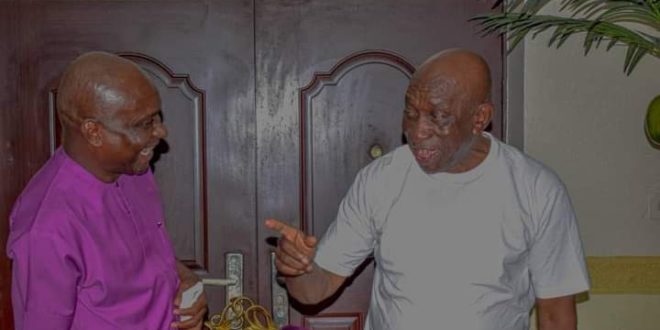 Share
On the backdrops of the forthcoming 2023 general election in Nigeria, the Speaker of the Abia State House of Assembly, Rt Hon Chinedum Orji, has lauded the outstanding qualities and remarkable roles of an elder statesman and political leader, Senator Chris Adighije, on the political stability in the state, and the existing harmonious tolerance, among the power brokers and critical political stakeholders of different party affiliations in Abia state.
He described Senator Adighije as a perfect democrat and authentic leader,  and recalled also that Senator Adighije demonstrated uncommon capacities and represented the Abia central district effectively at the senate, and  translated into attraction of  meaningful economic and Infrastructural amenities, and which also impacted positively in many livelihoods in Abia central district.
Mr Orji who stated this during his visit to the Okwu Olokoro Umuahia residence of an elder statesman and an Abia leader of the All Progressive Congress, Senator Chris Adighije, in umuahia south local government area of the state.
The Assembly Speaker, who emerged the House of Representatives standard bearer of the Peoples Democratic Party, for Ikwuano/Umuahia federal constituency seat at the concluded national assembly primaries conducted by PDP across the seventeen local government areas in Abia state, also stated that his visit was parts of his wide consultation with major leaders and stakeholders across party lines, on his  desire to represent people of the area in the National assembly ahead of the main elections in Abia, and many other states in the Nigeria federation.
Recall that the Abia Speaker, Chinedum Orji, had emerged the House of Representatives Candidate of the Peoples Democratic Party (PDP) for Ikwuano/Umuahia north/Umuahia south federal constituency seat at a concluded primary election held in Umuahia township stadium on Sunday 22nd May, 2022.
Orji polled 86 votes to defeat five other contestants and his closest rival, Obi Aguocha who scored 8 votes.
Others were Mr Chidebere Nwachukwu,  John Nwadinobi, John Ndubuisi and Kelechi Onuzuruike pulled two, two, one and nil, respectively.

Continuing in his speeches during the parley with Senator Adighije, Mr Orji hinted that his visit was part of the ongoing wide consultation with major political leaders and critical stakeholders across party lines in Ikwuano/Umuahia Ikwuano federal constituency, on his quest to represent them at the house of representatives come 2023, stating also that he was on the visit to solicit the blessing and support of the prominent Abia leader to actualize his 2023 house of representatives bid.

He also reiterated that his ambition is shrouded on rendering effective service to God and humanity, assuring to rewrite the narrative in the governance of  Ikwuano/umuahia bloc in of Abia state, through sponsoring of quality bill, make sound laws, and as well, draw government’s attention on siting of meaningful Infrastructural projects in the federal constituency, when elected as member of the green chamber.

The Speaker opined that enough had not been done to raise the standard of Infrastructures, and address the core challenges facing people at the area, and provide their  basic needs of the electorates in Ikwuano/federal constituency,  and assured to raise the bar in development of the constituency, through the attraction of important federal Infrastructures, and ensure youths, men and women are continuedly empowered to be self-reliant and self-dependent to take care their respective families, and many other developmental plans as contained in his manifestos.

The House of Representatives PDP Candidate, also reiterated his undeterred committment to replicate the audable developmental strides he had already achieved as the Speaker of the State House of Assembly and the representative of Umuahia central constituency ikwuano/umuahia extraction and Abia at large, when supported to emerge  victorious in the coming 2023 general election, and also solicited the maximum supports of Senator Chris Adighije, whom he admired for leaving behind footprints in dear heart of the people of Abia central senatorial district during his stay in the national assembly.
Responding during the visit at his Olokoro Umuahia residence, Senator Chris Adighije, harped on the need for leaders irrespective of political backgrounds, to ensure dividends of democracy is provided in every doorsteps of the people.
The prominent APC chieftain, maintained that the Ikwuano/Umuahia extraction had played and would continue to play important roles in political development of Abia state towards achieving a better and developed place for all citizens to thrive.
Senator Adighije who also turned 77 this year, reiterated that he is more concerned about the peace, stability and development of the state, and thanked the speaker of the Abia State House of Assembly, Chinedum Orji for the visit, and asked for God’s blessings upon the number three citizen of the state on his bid to represent Ikwuano/umuahia federal Constituency at the lower chamber of the national assembly come 2023.
Recall also that Senator Chris Adghije, had served as Chairman, Federal Psychiatric Hospital, Calabar, Cross River State (2002-2003); Chairman, Federal Medical Centre Umuahia, Abia State (2000-2002); Chairman, Abia State Water Board (1992-1994);
He had equally served as Federal Commissioner (Abia State) at the Revenue Mobilization and Fiscal Commission (RMAFC) Headquarters in Abuja (2010-2015); elected Senator (PDP), Abia Central Senatorial District (2003-2007); served as National Treasurer, National Republican Convention NRC (1990-1992); and Secretary, Nigerian National Congress NNC (1988-1989).
CLICK HERE TO DOWNLOAD PRESS RADIO MOBILE APP

In July 2020, Senator Adighije was appointed as Pro-Chancellor and Chairman of Council, Federal University Lokoja in July, 2020 by the Federal Government of Nigeria under the administration of President Muhammadu Buhari GCFR who is the Visitor to the University.