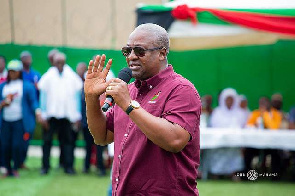 2020 suit “much ado about nothing; Mahama not losing sleep over it” – Campaign team

The spokesperson for former President John Mahama’s campaign team, Mr James Agyenim-Boateng, has said neither his boss nor the team is bothered in the least by a suit filed against the former Ghanaian leader challenging the constitutionality his re-election bid as flag bearer of the main opposition National Democratic Congress (NDC), and, if successful, as president of the Republic of Ghana – again, after having lost the 2016 elections.The suit was filed by a private Ghanaian citizen called Mr Stephen Agyeman, who argues that Mr Mahama’s re-election bid violates the 1992 Constitution, and, therefore, seeking a declaration from the court that Mr Mahama “cannot purport to seek re-election as President of the Republic of Ghana” pursuant to Articles 68 clauses 2 to 9 of the Constitution.Also, Mr Agyeman is praying the court for “a declaration that pursuant to Article 66 (1) and 66 (2) of the 1992 Constitution, the defendant is not qualified as a candidate to stand for re-election as President of the Republic of Ghana on the ticket of the National Democratic Congress.”He argues that since Mr Mahama enjoys some privileges as a former president, raising funds to support his bid for the flag bearer slot of the NDC without the permission of Parliament, contravenes Article 68 (2) of the 1992 Constitution.Apart from the above, Mr Agyeman is also seeking a declaration that Mr Mahama’s establishment of a campaign office for the purpose of seeking to coordinate his activities in his quest to become the flag bearer of the NDC constitutes “an office of emolument or profit within the context of Article 68 (2) of the 1992 Constitution and same having been established without parliamentary permission is in contravention of Article 68 (2) of the 1992 Constitution.”But Mr Agyenim-Boateng told Class News’ Joshua Quodjo-Mensah in an interview on Saturday, 16 February 2019 that the suit was “much ado about nothing”, adding: “We’re focused on delivering and running a very focused campaign and getting His Excellency John Dramani Mahama elected convincingly come next week”.“You know that we’re just seven days away from the NDC flag bearer race. This is a complete waste of time and we are totally not perturbed by this. We’re not losing sleep over this frivolous and vexatious suit”, Mr Agyenim-Boateng added.To him, “The fact that you run to court does not mean that you’re going to be victorious or you have a good case”.Mr Mahama is contesting six others for the flag bearer slot of the NDC. They include Second Deputy Speaker of Parliament Alban Bagbin, former UPSA Rector Prof Joshua Alabi; a former aide to ex-president Jerry John Rawlings, Mr Goosie Tanoh, former Minister of Trade and Industries Ekwow Spio-Garbrah, former CEO of the National Health Insurance Authority (NHIA) Sylvester Mensah and businessman Nurudeen Iddrisu.Source: Ghana/ClassFMonline.com