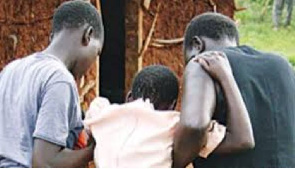 Two friends, who defiled a 13-year-old girl at Nungua, have been remanded into police custody by an Accra Circuit Court.

Aaron Acheampong, a student and Agbenyo Cyril Eli, a sales person, have jointly been charged with conspiracy to commit crime and defilement and Eli is facing additional charge of abduction.

They both pleaded not guilty before the court presided by Mrs Rita Abrokwah Doko.

The court is expected to rule on a bail application made by the lawyers of accused on March 8.

Prosecuting, Chief Inspector Kofi Atimbire said the complainant is a trader and mother of the victim. The victim resides with her mother at Nungua.

The Prosecution said Acheampong and Eli are the complainant’s friends.

He said on January 29, this year, the accused attended the complainant’s birthday celebration.

Chief Insp. Atimbire said at 11pm that same day, the complainant went out leaving the victim in the house, and Acheampong had sex with the victim in her mother’s room while Eli kept watch at the gate.

The court heard that after the act, Eli gave the victim some pill to take to avoid getting pregnant.

Prosecution indicated that the victim confided later in Eli that she wanted to leave her mother’s house and needed someone who would assist and pay her school fees.

Chief Insp. Atimbire said Eli on February 14, this year, lured the victim to Nungua Ravico and later to his house at Kantamanto, and had sex with her, and took the victim to his friend, Richmond, at Regimanuel Estates.

According to prosecution, the said Richmond who is now at large, also had sex with the victim.

Chief Insp. Atimbire said the complainant searched for the victim but to no avail, and she went to the office of airteltigo and took details of the victim’s phone calls, and it came to light that Eli had made several calls to the victim.

The court heard that a report was made to the Domestic Violence and Victim’s Support Unit (DOVVSU) of the Ghana Police Service and Eli was nabbed, and in his caution statement he confessed that he had kept the victim at his friend’s house at Regimanuel Estates.

Prosecution said when Richmond heard about Eli’s arrest, he freed the victim and fled.