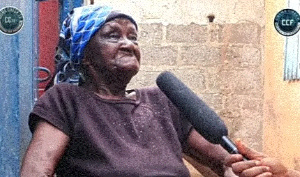 According to Crime Check TV which first shared the emotional story, the aged Mary from the Ashanti Region who sells water for a living left her home to take money from one of her clients who had been indebted to her to the tune of GHC 34.

Her caretaker whose name is given as Kate confirmed the incident on television monitored by MyNewsGh.com. She revealed “I was told that someone came to fetch water but did not pay. The old woman had sent several people there but the person refused to pay so she decided to go there on her own. However, she was not given the money when she went there. So Mary left there angered and as a result fell down when she was coming back home.”

“We took her to the hospital and the doctors did several tests on her but they said nothing was wrong with her and that it was old age. So Mary was bedridden and could also not talk. All she could do was mention my name. Even that, it was not frequent. She was bedridden until she died.”

“Even when I came, I also went there to ask for the old woman’s money but it generated into a fight between myself and the daughter of the person who came to fetch the water. To them, the old lady was cheating them so they decided not to pay. But everyone around said the water they bought was to the tune of GHC 34.”

Crime Check Foundation had earlier interviewed the 130-year-old woman prior to her falling and getting bedridden and had had donations from benevolent individuals who wanted to come in to help Mary because she was old and could not work to fend for herself.

However, although the donations came in, it was too late for Mary because she had kicked the bucket and therefore, Crime Check Foundation has indicated that it will donate the funds to her family to use it to find a better resting place for the old woman.