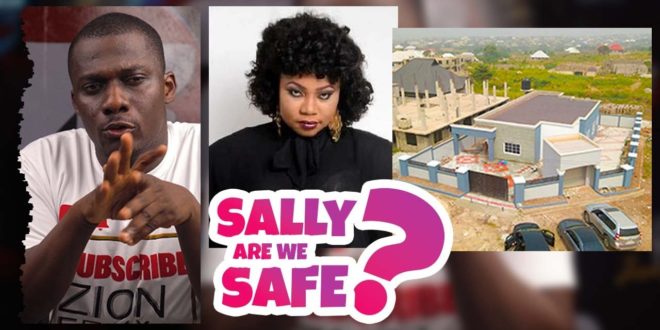 Ghanaian blogger, Zionfelix has responded to claims of ‘arrogantly’ flaunting the house he built for his parents on social media.

Earlier in a discussion on radio XYZ, popular entertainment pundit, Sally Mann, slammed the blogger for feeding the public with such a piece of information she termed unnecessary.

According to Sally, who shared her sentiments on the Power Entertainment show, she does not see the essence of Zion letting the whole world know what he has done for his parents.

“A few weeks ago, I saw a video on social media showing that he has built a house for his mother and father. That’s not all, he invited people to the house and introduced the building to them. And so what?” she asked.

“2 Cor 12:14 speaks about parents acquiring properties for their kids though some parents may not afford it due to hardship”’ she established.

However, Zionfelix who seems unhappy about Sally’s utterances took to his official YouTube channel to give a reply.

“It hurts that you do something with good intentions and someone sits somewhere and says all sorts of things about it. First of all, how did this even become a discussion on radio? And so what?” he also asked.

“There are so many things they could have discussed there. Sally spent five minutes on prime-time radio talking about me. No problem. If it is about show off, there are other things I can show off with. But it’s not important,” he stated.

He, however, gave reasons for his actions.

“First of all, there is a reason why I did that. I’m a young boy in my very early 30s trying my best in life and doing something for my parents. There are so many people that can take motivation out of this,” he added.

On January 5, 2023, Zionfelix outdoored a 4-bedroom house in Kumasi for his parents.

The inauguration of the building was witnessed by close family relatives and some friends.

Pictures and videos from the event which were spotted on the bloggers’ Instagram page, captured his parents in an elated mood after a car was also presented to them.

Previous ‘OV slept with one of our beatmakers, did ‘things’ with some BHIM girls’ – Ayisha Modi
Next Kenyan Occultic pastor narrates how he was ordered to sacrifice six church members