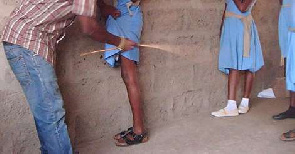 Zimbabwe’s constitutional court has banned the caning of juvenile convicts as a judicial punishment.

Nine judges decided that judicial corporal punishment was illegal under the country’s constitution.

They ruled it was cruel, inhuman or degrading treatment or punishment.

While attitudes are changing, many parents in Zimbabwe still believe corporal punishment is the best way of disciplining children, says the BBC’s Shingai Nyoka.

Caning as a judicial punishment was permitted in Zimbabwe for males under the age of 18 under the Criminal Procedure and Evidence Act and has been a common sentence.

However, the judges found that it contravened a section of the constitution adopted in 2013, which states that no person may be subjected to “cruel, inhuman or degrading treatment or punishment”.

The ruling came after a 15-year-old boy convicted of raping a 14-year-old girl challenged his sentence of three strokes of the cane.

The full details of the case have not been made public.

Previous Ghana-Cuba cooperation to be extended to malaria eradication – Akufo-Addo
Next Brexit: UK asks EU for further extension until 30 June