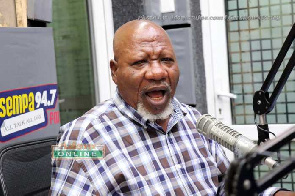 “Peace council chairman should bow his head in shame. He is a hypocrite. How can you put the cart before the horse? When they gave him pressure and then he comes out to talk. And he is condemning Mahama. I am looking at the screen to say shame on you, Rev Asante, shame. Shame. Shaaaame Rev Asante. Please put the camera on me, yes, shame on you! Shaaaame!”

The above are the words of Former Central Regional Chairman of the opposition National Democratic Congress Bernard Allotey Jacobs who is adding his voice to the condemnation of the Peace Council Chairman over his call on Mahama to apologize for his “boot for boot” talk.

Mr Allotey said that the ‘Boot for Boot’ term is like a magic wand for aspirants seeking higher office in Ghana as Akufo-Addo said it too when he was in opposition.

In an interview monitored by MyNewsGh.com on Adom TV, Uncle Allotey as he is affectionately called said Mahama is not the original owner of the term ‘Boot-for-Boot’. According to him, then candidate Akufo-Addo also used it and “today he is president.”

“I support Mahama for saying boot for boot. Akufo-Addo said the same thing when he was in opposition. It has become like the Boot for boot is a magic wand to win power.” He pointed out.

“I support Former moderator of the Presbyterian church. I commend the Catholic Secretariat. The vigilante issue is getting to a very dangerous side. I have seen the minister, Bryan Acheampong, very nice guy, he is proud of what he has done. That he sent hoodlums to cause mayhem. So care has to be taken. All political parties must meet to find a solution to the vigilantism.” He added.