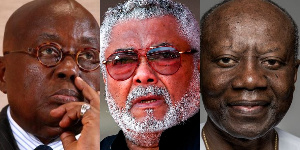 The Akufo-Addo government is facing criticism from some Ghanaians particularly members of the opposition National Democratic Congress for allowing former President of Ghana, Jerry John Rawlings to die at the Korle Bu Teaching Hospital in Accra while flying Finance Minister designate Ken Ofori-Atta to the United States for treatment.

The reactions come after Finance Minister-designate Ken Ofori-Atta was flown to the United States of America over COVID-19 complications yesterday.

“The Ministry of Finance wishes to inform the general public and stakeholders that Mr. Ken Ofori-Atta, the Representative of H.E the President at the Ministry of Finance and Minister-designate for Finance, will travel to the United States of America today for a special medical review,” a statement by the Finance Ministry Sunday said.

It added: “After recovering from COVID-19 last December, Mr. Ofori-Atta has had medical complications which doctors advise, require further interventions not currently available in Ghana.

The statement noted Parliament has been informed of the health condition of the former Finance Minister.

”He is expected to be away for two weeks. Mr. Ofori-Atta was scheduled to appear before the Appointments Committee of Parliament on Tuesday, 16th February, 2021. The leadership of Parliament has been duly notified for a new date to be fixed upon his return“.

Nana Baffoe Ba, an activist of the NDC reacting to the development wrote on his social media handle:

“PAPA J as former president was sent to Korle Bu and die subsequently.

Ken Ofori-Atta as minister, yet to be approved is flown to the US for treatment. Ah well!” 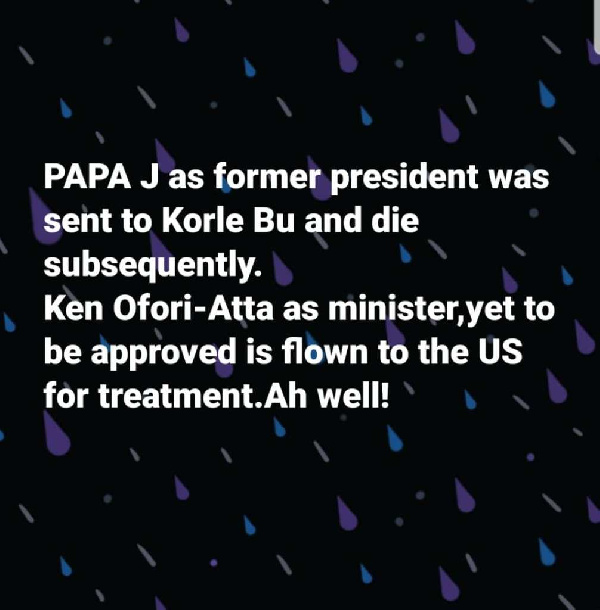