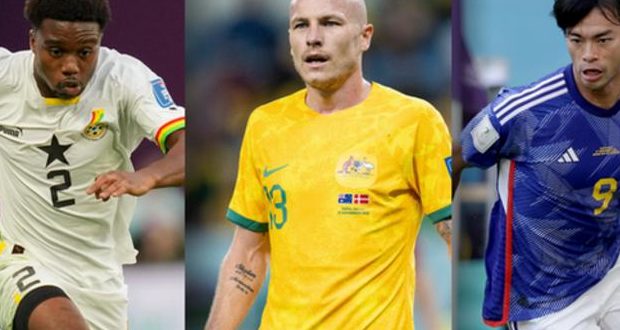 It has been the busiest World Cup group stage ever.

Forty eight group games have been packed into 13 hectic days at Qatar 2022, with the usual drama, spectacular goals and upsets aplenty.

We have been asking you to rate the players in every game played so far and have now crunched the numbers to discover the hits and misses.

It looks like Brighton fans have been busy – six of the highest-rated XI have played for the Seagulls – and many of your team have at some point appeared in the UK, with Arsenal, Stoke City, Celtic and Sheffield United all represented.

Meanwhile, there is no space for Kylian Mbappe, Lionel Messi and Co in the BBC Sport users’ player-rater XI.

Your team of the group stage

The Group Stage XI, as decided by the best average rankings from BBC Sport users… 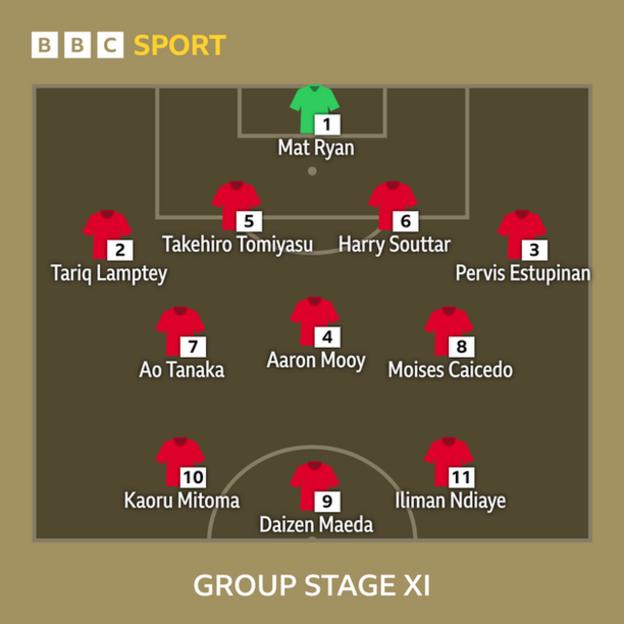 Before every World Cup, countless players are talked up as those who will light up the tournament or potential breakout stars. We doubt any of our top five performers from the group stage would have featured prominently, if at all, in any of those discussions.

Arsenal’s Takehiro Tomiyasu has only made two substitute appearances for Japan but tops the list with an average rating of 8.71 (we’ve stipulated players must have featured in at least two games to make the cut).

Celtic striker Daizen Maeda is the second of four Japan players in the top five with an average rating of 8.57. Like Tomiyasu, you fancy he might also have benefitted from the fact he was not involved in the defeat to Costa Rica.

The same goes for Ao Tanaka, although scoring the goal that saw Japan through to the knockout stage probably helped a bit too, warranting his 8.25.

Speaking of that controversial goal, the man who was judged to have just kept the ball in play was Kaoru Mitoma. The Brighton forward came off the bench in all three of Japan’s group matches and never failed to make an impact – a well-earned 8.48.

Rounding out the top five is Senegal’s Iliman Ndiaye on 8.22. The Sheffield United attacker, who spent three years in English non-league football with Boreham Wood, made a big impression off the bench in a 3-1 win over Qatar, setting up the third goal.

How did Home Nations players perform?

It will surprise no one to hear England’s players have fared a lot better than Wales’, with Robert Page’s side on their way home after one point from three and the Three Lions into the second round unbeaten.

What may come as a slight surprise though is that you have rated Phil Foden as England’s star performer so far, with his scores from a substitute appearance against Iran and his first start against Wales averaging to an impressive 7.54.

Looking at England players who have started every game and it is Borussia Dortmund’s midfielder Jude Bellingham who leads the way, averaging 6.64, with only his score of 4.7 in the drab goalless draw with USA leaving him below Foden – who didn’t feature.

Chelsea’s Mason Mount, who Foden replaced in Tuesday’s win against Wales, has been your fall guy so far, with the lowest average of 5.04 from his two starts.

For Wales, you rated Bournemouth frontman Kieffer Moore as their top performer, with an average of 5.03.

Moore was brought on a half-time substitute in their opening draw with USA, before keeping his place for the last two group games.

And your worst performer for Wales? It’s Gareth Bale with 3.57…

There have been no shortages of shocks in the group stage but one in particular seemed to stand out, with three of the top individual performances, as rated by you, all coming in the same game – and all were substitutes as Japan came from behind to beat Germany.

Brighton winger Mitoma was on the pitch for just 40 minutes, including stoppage time, but did enough to earn the second-highest match score of 9.13.

Ritsu Doan came on as a 71st-minute sub and lashed the ball into the back of the net four minutes later to bring Japan level to earn a 9.05 rating. Coming in just shy of that is Tomiyasu on 9.01.

But the highest individual ranking of all? Son Heung-min, whose tears of joy after South Korea’s win over Portugal on Friday earned the forward a heady 9.15 rating.