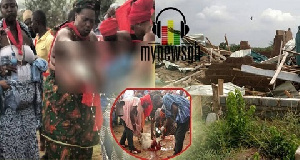 Some angry women, believed to be natives of Otinibi, Kweiman and its surrounding communities within the La Nkwantang Municipality of the Greater Accra Region have bared teeth at government over a recent demolition exercise in the area.

The aggrieved women who recently went partially naked exposing their dangling boobs, cursed the President Nana Addo Dankwa Akufo-Addo’s government and officials of the Ghana Police Service who were party to a grand scheme to demolished their buildings over claims that government have already acquired the said piece of land upon which their buildings occupy.

According to them, they will still do more if government fails to compensate them after a combined team of armed police and military personnel supervised the demolition of their homes.

Over hundreds of houses at various stages of construction with some completed were pulled down in the area recently.

The Government of Ghana claimed it in August 1970 acquired over thousand acres of land from the affected area for a cattle ranch but residents claim it has refused to compensate the owners till date, a situation which necessitated a negotiation between government and the primary owners.

Previous A/R: One of two persons drowned recovered
Next My manhood didn’t work for a while after my madhouse documentary – Anas Aremeyaw Anas