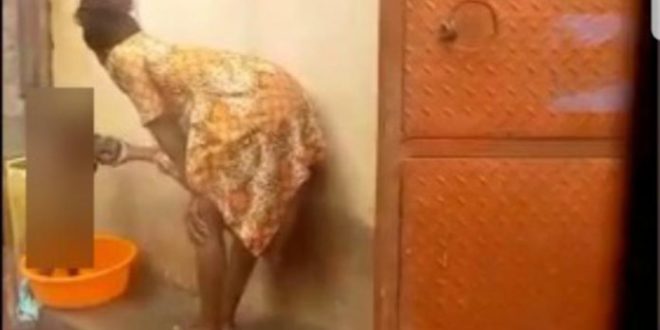 The police in Uganda have nabbed the lady who was captured in a viral video torturing her two-year-old daughter for refusing to bath.

The suspect has been identified as one Dorothy Nabulime, a 22-year-old mother-of-three.

She was arrested after the viral video sparked global outrage.

The suspect was caught on footage beating the victim repeatedly with a shoe while hurling unprintable names at her.

Then, the victim falls out of the basin, onto the verandah, and down onto the ground, headfirst – but the suspect continued to beat her vigorously.

She is, at a point in time, heard yelling at the victim to stand up and bathe.

The Ugandan police in a tweet revealed that Dorothy has been arrested and will be presented before a court on Monday.

Meanwhile, the victim has been handed to close relatives pending further investigations.

There has been calls for Nabulime Dorothy to be taken for mental health check-up and rehabilitation.