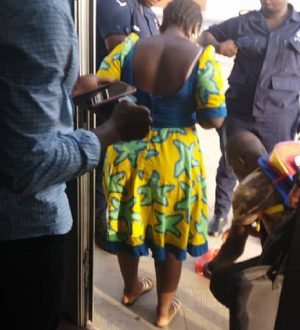 A woman was arrested for selling marijuana or ‘weed’ at the Accra Sports Stadium during the Ghana Premier League match between Great Olympics and Liberty Professionals yesterday, Ghanaguardian.com has reported.

The yet-to-be identified lady was arrested by personnel of the Ghana Police Service for the possession and sale of narcotic drugs during the game in the Ghanaian capital.

The woman was nabbed in the act by the Police and it was said she was selling the substances at the hub of the Accra Sports Stadium known to be occupied by supporters of Olympics.

Her arrest does not suggest she was selling to Olympics supporters and no supporter was arrested as a customer of the woman.

She is said to have been spotted selling the narcotic drug at the centre line area of the stadium to some spectators who had come to the stadium to watch the game.

The lady who is believed to be in her mid 30’s was sent away together with her dried leaves suspected to be wee to the Greater Accra Police where she will be processed before court.

In the said game Accra Great Olympics defeated Liberty Professionals by 2-1 in an entertaining game.