Why Yaw Dabo is trending on Twitter after Argentina’s loss 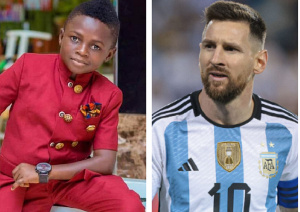 But in all that ensued, the spotlight has been thrown on the Argentina captain, Lionel Messi, under whose watch the team suffered the painful defeat.

The 2021 Ballon d’Or winner who has been nicknamed after ‘Ghana’s Yaw Dabo’ due to his diminutive nature became the topic for discussion following what has been described as a poor performance displayed during the match, making the name ‘Yaw Dabo‘ occupy the first spot on the Ghana Twitter trends.

This world cup will expose Argentina Yaw Dabo and his entourage that they are nothing.

The Argentina coach said he is resting his key players for the big games. No wonder Lisandro Martínez is on the bench and Yaw Dabo is starting as Captain ????????????

Saudi Arabia should be ranked above Argentina,as for yaw Dabo (Messi) he is a fraud to football lovers. Finished.???? .

What do you think he was telling Messi ?

Yaw Dabo with Argentine birth certificate please do something before you retire pic.twitter.com/4cHKmPoOTt

I’m here to remind you that finished Yaw Dabo Messi doesn’t have a single goal in the whole of August.