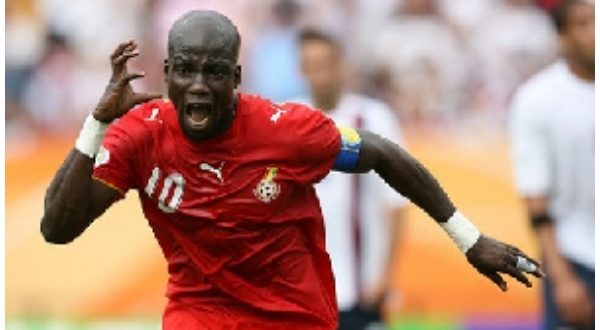 Why Stephen Appiah is trending on social media

Former Black Stars captain Stephen ‘Tornado’ Appiah is up in the trends on Twitter as debate rages on who is the best person to have led the Black Stars.

Ghanaian football fans on the platform are arguing over the leadership qualities of Stephen Appiah, Abedi Pele and Asamoah Gyan.

The three Ghanaian football legends steered the affairs of the playing body of the team with Asamoah being the latest.

Abedi Pele captained the Ghana side that finished second at the 1992 Africa Cup of Nations in Senegal.

Appiah is credited with leading Ghana to two world cups and a number of Africa Cup of Nation tournaments.

Asamoah Gyan took over from John Mensah and led Ghana to AFCON from 2012 to 2017. Gyan was stripped of the captaincy in 2019 by coach Kwasi Appiah.

Appiah is credited with managing the egos of Ghana’s golden era in the 21st century. His leadership qualities have been talked up by many as the reason there was unity in the team’s camp during competitions.

Among the three football greats, many believe that Appiah is exhibited the greatest form of leadership and deserves the accolade of best Ghanaian captain.

I will vote for Stephen Appiah

He wes a good leader and an excellent example to many, during his time he never had problems with others.#WontumiSports

Stephen Appiah is far ahead..exemplary leader who is loved by Everyone..#wontumisports Emmanuel of advans Ghana @tafo

#WontumiSports good afternoon abou Diaby is me Salim Tito Burniton from Asawasi. I will go for B that’s Stephen Appiah on any day because of his selfless leadership on our Black stars. Special greetings to my sweetheart Benedicta Serwoonu.

I’m in for . STEPHEN APPIAH in any day, I’m Modric junior ##wontumisports

#wontumisports, I’ll choose Stephen Appiah on any day, A selfless leader, every inspirational and somebody who brings his team together. Nana Ansu. Accra

Stephen Appiah stands tall. He was by far the most successful.

Stephen Appiah Wil always be the best captain ever

For the leadership qualities none of them come close to Stephen Appiah,but i will choose to start Asamoah Gyan on any day using performance and mental toughness.

Previous My husband beats me but I cannot leave him – Woman cries
Next Ho: Two basic schools lose roofing in tempest