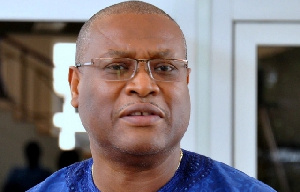 A Spokesperson for the National Democratic Congress (NDC) in the election petition case, Alex Segbefia has said that the NDC decided to opt for a rerun of the elections because of the limited time at their disposal to prove their case.

It has emerged that the National Democratic Congress after the 2020 elections said through its Deputy General Secretary Peter Boamah Otukonor that it has won the 2020 Presidential elections by 6,166, 385.

“From the spreadsheet, you will see that provisionally, we have won this election by some 6, 166, 385 votes and that constitutes 50.15%. This is a resounding first-round one-touch victory for President John Dramani Mahama,” he said at a Press Conference covered by MyNewsGh.com.

However, the NDC’s leader, John Dramani Mahama in his petition to challenge 2020 elections has asked for the Supreme Court to order for a rerun of the election because to him no one won the election.

This has raised doubt about their petition and whether it can stand the test of time.

But speaking in an interview monitored by MyNewsGh.com, the former Health Minister who speaks for the NDC said with the limited time of 42 days in court, it imperative that the NDC puts their best foot forward.

He said while defending the NDC’s petition that “There is the issue of we said we won so why are we now saying that we are going for a re-run. Unlike others who had 10 months to run a case, the practice direction and rules now say a case should be done in 42 days. It becomes very important that when you have this type of time limit, you have to put your best foot forward to get to a point which is of use to you”.

Arguing further, he said “So, we do not have the benefit which occurred in 2012 of calling pink sheets upon pink sheets. It won’t work. We’ll run out of time and the court will get upset with us. It will take us a full 10 months in court to run a case to demonstrate what many of us believe. It is not as simple and straightforward as that.

As one late Chairman of our party said, there are many ways of dealing with a cat so we’ve decided to go down this particular road. It may come to certain aspects of that in this trial but at least because of the way in which we are handling this case we believe that we are trying to keep to the rules and regulations set out by the court and we cannot get the courts upset when we are actually going to run a case of this nature”.

Previous What to expect from Akufo-Addo final State of the Nation Address
Next Illegal miners clash, one dead