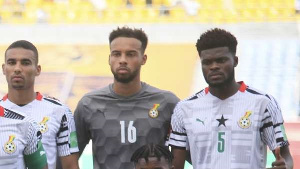 Wallocot (middle) made his Ghana debut against Zimbabwe

Wollacott got the nod to start ahead of Richard Attah who has an imposing physical figure. The Hearts of Oak goalkeeper failed to make the matchday squad.

St Gallen goalkeeper Lawrence Ati-Zigi was this time round dropped to the bench while Danlad Ibrahim just like Attah wasn’t on the bench.

Despite playing in fourth division football in England, the Bristol-born got the nod to start in post for the Black Stars due to this compelling reason.

The height of the goalkeeper put him above all the three other goalkeepers who were available for the match and could possibly depose Richard Ofori for the No.1 spot.

Wollacott has a height of 1.9m and that put him above Richard Attah whose height is 1.87. Below is the height of all 5 goalkeepers at Milovan’s disposal.

This is the compelling reason why Milovan Rajevac opted for him to start ahead of the other goalkeeper available to him. Every modern manager will opt for a goalkeeper with a strong physical presence and good height.

Now how does Wollacott’s height compare to goalkeepers of the top six English Premier League clubs?

From the data available, only 3 out of the top 6 Premier League goalkeepers are taller than Wollacott and that is a plus for him.