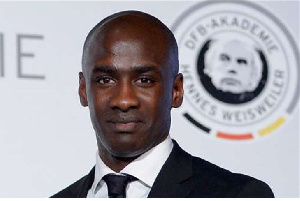 Barring any government intervention or u-turn, former Black Stars winger, Otto Addo will be appointed coach for the Black Stars for the double-header against the Super Eagles of Nigeria in March, Henry Asante Twum, the Communications Director of the Ghana Football Association has confirmed.

Henry Asante Twum confirmed in an interview with Asempa FM on Thursday, February 3, 2022, that the GFA has settled on Otto Addo as the next coach of the Black Stars.

Otto Addo’s imminent appointment will be in acting capacity which will see him handle the Black Stars for the game against Nigeria.

Henry Asante Twum said that the FA settled on Otto Addo for the tie due to a multiplicity of factors.

Aside the fact that Otto Addo is familiar with Ghana and Africa football, his recent spell as an assistant coach makes him suitable for the game.

With the team not having much time to prepare for the game against Nigeria, Henry Asante Twum argues that it is only wise that Otto Addo is appointed in acting capacity.

He said that the FA will make a definite decision on the future of Otto Addo after the two matches against Nigeria.

“The decision to travel to Germany is not like someone is showing pride and does not want to engage. In that meeting to sack Milovan Rajevac, it was said that we needed a coach who will come in and not be overwhelmed because the coach will only have three days of training,” Henry Asante Twum said.

He added, “so if you bring someone entirely new, he is now coming to get used to the players and it will take time and sometimes a miracle to be able to succeed. So why don’t we look within because Otto has been with us as an assistant.”

He revealed the focus of the visit was to persuade Dortmund officials to release Otto Addo for the exercise in March.

The FA are in search of a new coach for the senior national team after sacking Serbian coach, Milovan Rajevac following an abysmal performance at the AFCON 2021.

The Black Stars exited the group stages picking just a point. The team which had 17 debutantes failed to win any game at the tournament as they lost to Morocco and Comoros and picked up a point against Gabon.

Milovan Rajevac was shown the exit on January 25, 2022, exactly five days after the team returned home following a directive from the Ministry of Youth and Sports.