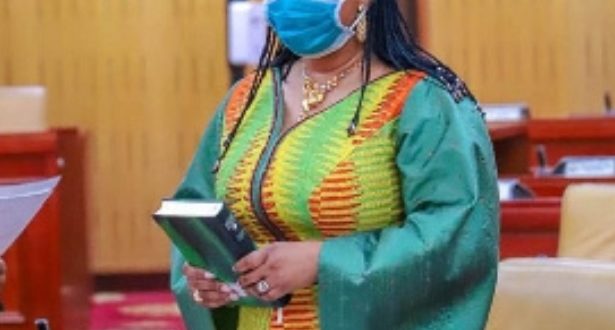 Why Adwoa Safo is still on leave

Adwoa Safo is still on leave

She has not reported to Parliament this year

Adakabre Frimpong Manso has been given some explanations

There have been calls for the governing NPP to make the Dome-Kwabenya seat vacant so that a by-election can be held to elect a new Member of Parliament.

This according to some NPP supporters will allow for Parliamentary business to continue since absentee MP for the area, Sarah Adwoa Safo is impeding progress.Hi Madam Blessing 0

Adwoa Safo has been absent from Parliament for a while following an extension of her leave which was granted by the President in 2021.

But why has Sarah Adwoa Safo stayed on leave for so long?

Adakabre Frimpong Manso, a broadcaster with Despite Media’s Neat FM, has been outlining some reasons that have kept the minister out of the office, and with that, her absence is being felt in Parliament.

According to Frimpong Manso, Adwoa Safo before her leave some eight months ago, was pregnant but she had a miscarriage which led to her extended leave in 2021.

He said, the circumstance that led to her miscarriage was communicated to the appointing authority but due to how women who go through such processes suffer psychological trauma and all, her leave was extended.

Adakabre Frimpong Manso further indicated that, one of Adwoa Safo’s children [a boy] who is currently in the States, had an issue with his knees which made people including the child’s school authorities keep calling her [Adwoa Safo] to complain about what the child is going through.

As a mother, the broadcaster said, she needed to be around her child to take very good care of him because Adwoa Safo’s son’s knee issue required a surgical procedure.

“This, initially took her [Adwoa Safo] to the US but when the issue escalated, that the child needed to undergo some surgery, it also prolonged her stay.

“But Adwoa Safo in all these, came to Ghana, spent two weeks, attended to her Parliamentary duties because, at the time, the government needed the numbers to pass the budget but she had to go back and take care of her sick son.

“She went to seek permission from the President of the Republic and also informed the Chief of Staff about the situation and the permission was granted for her to extend her leave,” Adakabre Frimpong Manso said.

Regarding Kennedy Agyapong’s allegations that, Adwoa Safo wanted the job of Alexander Kwamina Afenyo-Markin, Frimpong Manso explained, as a Deputy Majority Leader in the seventh Parliament, she was not communicated to that, her position will be given to another MP; she only heard on the radio that “Kwamina Afenyo-Markin is the deputy leader.”

“On the GHC120k paid into her account, Adwoa Safo said, her son and the father [Kennedy Agyapong] were having a conversation on phone and the boy prompted his father that his birthday was approaching, so, the father promised to surprise him, which made him happy.

“On February 17, she completed all necessary arrangements and discussions with the Finance Minister, so, she was preparing to come back into the country on February 23, only for her to hear her name on Asaase radio being dragged and labelled a failure. This is Adwoa Safo’s story,” Adakabre Frimpong Manso stressed.