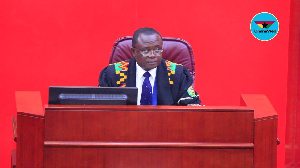 Where else do your children know aside Accra? – Joe Wise asks Okaikoi Central MP

Joseph Osei-Owusu, the Chairman of the Appointments Committee of Parliament on Thursday, February 25, 2021, quizzed the member of Parliament for Okaikoi Central, Patrick Yaw Boamah on his personal contribution to the growth of tourism in the country.

This occurred when the MP attempted to ask the Minister-nominee for Tourism, Creative and Culture how he intends to grow the sector.

Yaw Boamah had sought to know the plans Dr Awal Mohammed has for the sector.

While asking his questions, Joe Wise as he is known interjected “your own children, where do they know aside Accra?”.

The Okaikoi Central MP revealed that he has made it a plan for his children to visit a region each whenever they go on vacation.

He said, “I have made it a plan to that every vacation, I take them to one region”.

His response was met with a nod of commendation from Joseph Osei Owusu who was clearly impressed that the MP was in his own promoting tourism.

Tags ACCRA ASIDE CHILDREN DO ELSE KNOW WHERE your

Previous Man gets 20 years for setting alight girlfriend
Next Mohammed Polo to petition President Akufo-Addo over $51,000 debt owed him