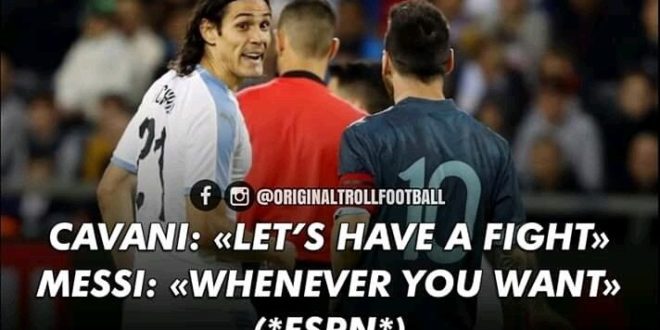 Whenever you want!’ – Messi replies to Cavani’s fight-it-out invitation (Ole)

Lionel Messi and Edinson Cavani were involved in a heated exchange of words during Argentina’s international friendly against Uruguay at the Bloomfield Stadium in Tel Aviv, Israel.

The two sides played out an interesting encounter, with Messi’s late penalty ensuring the match finishes in a 2-2 draw after goals from Cavani and Luis Suarez had given Uruguay the lead.

The two stars of the sport can be seen exchanging a few words in the video below before former Atletico Madrid star Diego Godin stepped in to intervene. As per Argentina daily Ole, Cavani insisted Messi to ‘fight it out’, in reply to which the Barcelona superstar said, ‘Whenever you want’.

There have been reports of an altercation in the tunnel as well after what was a fairly charged-up encounter between the two South American sides. Here’s the video of the bust-up between Messi and Cavani.