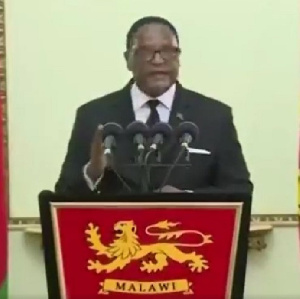 When the President of Malawi, Lazarus Chakwera, got hold of an audit report from his country on the expenditure that had been done with respect to some COVID-19 funds, he went full throttle, making heads roll.

The actions, as he stated in a video that has emerged on social media, were so drastic that some of them included the immediate sacking of a critical cabinet minister.

Other people who were named as engaging in corrupt practices were also arrested and forced to repay all of the money they stole.

The video, shared by TV3’s Johnnie Hughes, showed President Chakwera addressing his country via video, and laying out all the immediate actions he had instituted to ensure that all the ‘thieves’ named in the report are dealt with.

He explained that he feels the same anger and anguish as his fellow citizens, but actions will be taken to ensure that they retrieve all the monies that have been lost or stolen.

“I can assure you, everyone, that there is no place on earth where these criminals will hide. The anguish and outrage you all feel from reading this audit report is not only righteous but also one that I personally feel.

“And now that the evidence related to the 6.3 billion is before us, I’m taking action. As I speak, over a dozen individuals suspected of committing the crimes exposed by this audit report have just been arrested by the Malawi Police Service,” he said.

President Lazaru Chakwera also sent out a warning to all other civil service workers in the country to be on guard, because should they be found guilty, they would go to prison.

He also indicated that he had directed for the arrest of some officials who superintended over such corrupt actions.

“So, I want all the thieves hiding in the civil service to mark my words: if the finger of evidence points to you as one of the thieves that stole COVID money for saving lives, while hundreds of our people were dying of COVID, you are going to prison. On top of that, we will use the relevant laws to ensure that you pay back what you stole.

“I have directed the secretary to the president of cabinet, (sic), to interdict (sic) those public officers whose direct watch a financial mismanagement occurred,” he added.

The president also explained the decision he had taken on his Minister of Labour, stating that he has ensured that the official has returned all the monies he stole.

“As for the Minister of Labour, who was named by the audit report as having spent COVID funds amounting to 613,000 on his allowances for a foreign trip, I have dropped him from my cabinet accordingly,” he said.

Ghana is currently at a similar crossroads, as the Auditor-General, Johnson Akuamoah Asiedu, has released a report on the audit of the Government of Ghana’s COVID-19 expenditures for the period March 2020 to June 2022.

In the report, there have been such revelations as the Ministry of Health spending GHC 20 million to renovate an apartment that it rented for GHC 15 million.

Also, the report indicated that nearly 50% of all COVID-19 funds were used for budget support, and not to fight the pandemic itself.

The audit report also showed that the Ministry of Information, headed by Kojo Oppong Nkrumah, paid its management and staff an amount of GH¢151,500 as risk allowance, even though they are not health workers.

President Nana Addo Dankwa Akufo-Addo of Ghana is however yet to comment or make any statement on the audit report.