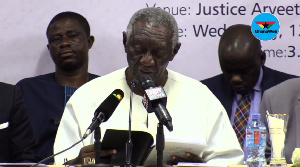 Former President of Ghana, John Agyekum Kufuor has asked all political powers in the country to disown secessionists in the Volta Region describing their actions as a Coup d’état in sharp contrast against the provisions in of the Ghanaian constitution

The Volta separatist group known as Homeland Study Group Foundation (HSGF) has over the years been advocating for independence from Ghana. Several members of this group have been arrested after they were alleged to have engaged in violent activities to champion the cause of the group. These people were later released after the state did not pursue the matter.

A fortnight ago, members of the Western Togoland group expressed their agitations for independence by blocking some roads in the Volta Region and attacking some police installations at Mampe and Sogakope where they made away with vehicles and rifles.

Speaking in an interview with Oman FM’s Kwabena Kwakye monitored by MyNewsGh.com, the former President said any individual who wants power in Ghana should use the constitution because it stipulates the boundaries of the country and what it takes for any individual to seek for power in the country.

To him, the country Ghana has prospects and therefore a few individuals should not be made to take the country to ransom.

” I will plead… Everyone loves to have power but there is a right way to seek for power so no one should take the power into their hands. Ghana has a constitution so when seeking power use the constitution and talk to people to give you the power you need. The Constitution determines what Ghana is and determines the country’s boundaries. So how can citizens rise up one morning to say they are not part of Ghana and also do not use Constitutional means to take power. What they have done is more or less like a coup d’etat.

“No one should aid these people. We should make sure our utterances do not fuel their energy and give backing to their activities because what you say may be deemed as aiding their activities. If we continue to provide good governance in Ghana, Ghana will be the best place in the world to live.”

“We should ensure that the country continues to enjoy the democracy it is enjoying because currently, it’s difficult to go to people’s countries so if there is any problem, we will suffer so such people should not be countenanced.”

Previous SAD News Hit Reverend Obofuor And His Family
Next Mfantseman MP’s murder: We are paying for recruiting the likes of ‘Double’ into National Security – Col. Aboagye