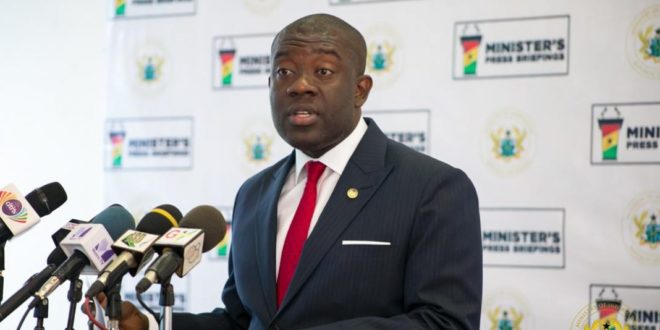 Information Minister Kojo Oppong Nkrumah has said the work of the inter-ministerial committee on illegal mining will continue until further direction comes from above.

According to him, the government will examine the raw footage of the investigative piece by Anas Aremeyaw Anas which captured some officials of the committee taking bribes to compromise their roles in the fight.

Commenting in the video which aired on television stations Wednesday night, Mr. Oppong Nkrumah said the government welcomes help from any Ghanaian in the galamsey fight.

“Government welcomes any support that is aimed at helping us win this fight because we are committed to this fight. We are happy to receive whatever help anybody has. We are a nation of men of different backgrounds who work in pursuant of the state agenda.

“We will not give timelines, the point we want to make clearly is that there is a documentary out there, there are some raw footage that serves as the basis to it. It’s of interest to the state and we will examine it. Work proceeds until we are told otherwise by our principals. So the work proceeds, if in the process of the fight there is information out there that somebody has compromised the fight, it is important to have access to it and to examine and then to take necessary actions,” he told Journalists Thursday morning.

Meanwhile, Anas and his Tiger Eye Pi team are set to present a petition to the office of the Special Prosecutor investigate the suspects who were caught taking bribes to facilitate illegal mining despite the government clamp down on the act.

“The petition says some people have been exposed in bribery and corruption and thwarting the state’ effort at fighting illegal mining,” one of the lawyers for Tiger Sammy Darko told Francis Abban on the Morning Starr Thursday.