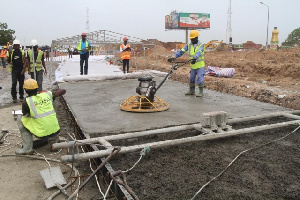 Road contractors who are owed over GHC500,000 by the government are fuming over what they say is government’s refusal to pay them despite claims by President Akufo-Addo.

According to the contractors, the pressure on them has heightened after President Akufo-Addo claimed he has paid all contractors during his recent tour in the Greater Accra region.

“The situation is unbearable now, nobody believes us again. Because the president is claiming to have paid all contractors, everyone we owe is coming for their monies. But the President knows very well that he hasn’t paid all of us so why is he doing that to us,” one of the unpaid contractors Kwadwo Asomaning told Starrfm.com.gh.

The President told wives of contractors that he has paid their husbands and, so, this year’s Christmas season would be an enjoyable one.

“They [your husbands] are aware”, the President insisted, adding: “So, this Christmas promises to be great for you traders and for all of us”.

Months ago, the President released GHS2.2 billion through the Ministry of Finance for onward payment of debts owed road contractors.