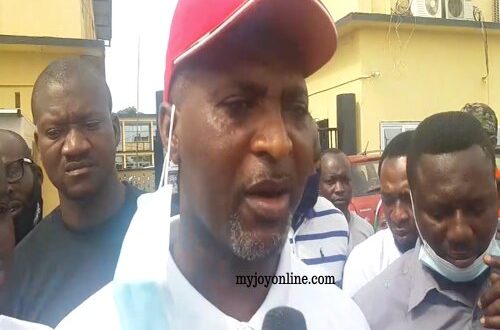 The arrest of 10 men believed to NDC activists at Aboabo in Kumasi for allegedly engaging in acts of vigilantism has sparked reactions from some supporters.

Police are yet to give reasons for their arrests but Minority Chief Whip, Muntaka Mubarak says he is worried about the reoccurrence of such arrests.

The Asasawe MP said the persons arrested are yet to write their statements so they will be bailed.

“The police have said they are looking for a particular person and they heard that person was hovering around. They showed me a video and when I watched it, the wanted person looks nothing close to near any of our boys.

“I am very careful about those around me because I know all about the Vigilante Law. We are not putting up any vigilante group. These are young boys who handle the posting of our posters and they don’t engage in vigilante acts,” he said.

He said they know those arrested very well as well as their occupation.

The move has got some supporters messing up at the Aboabo Post Office indicating they want to start a protest this morning.

The Asawase MP has called for cool heads saying the police must be given the space they need to do their work.

Muntaka said the party is getting concerned with what he describes as “intimidation” of the opposition.

“It is becoming difficult that since the voters’ registration exercise, you will be there and they will just arrest your agents without any good reason. We go to the police station and bail the person.

He said regarding the latest incident, some persons who misbehaved were caution around his office and they threatened getting some people arrested.

“In the night they came to arrest those people but the police is telling us they were looking for some suspects in a robbery case and they heard they were around the said area,” Muntaka said.

According to the legislator, the Commander told him those arrested are only part of the suspects who will be screened and if they happen not to be involved, they will be allowed to go free.

“We know without the police we are all not safe but the incessant repetition of this kind of arrest and bailing them is our worry,” he said.