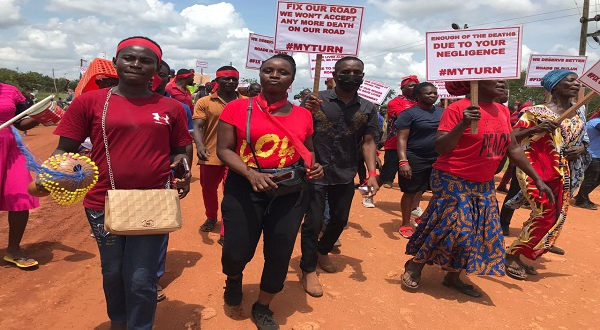 Residents of Fumbisi in the Builsa South District of the Upper East Region have called on the government to give priority to road construction projects in the area.

The residents said although the area is a noted hub for rice production, it lagged behind in many aspects of development such as road infrastructure.

Speaking during a protest to register their displeasure in the poor nature of roads in the area, the residents in a petition noted that the Chuchuliga- Sandema- Wiaga- Gedema – Fumbisi – Wiesi road project, which was awarded in 2016 and was supposed to be completed in 2019 is still uncompleted.

They said that the bad roads were causing low patronage in major markets in the area such as the Fumbisi and Sandema markets, as drivers refused to extend their commercial activities there.

Doctors, Teachers, Nurses and other professionals, the petition added, were also not encouraged to work in the area due to the bad nature of roads which made many parts of the district inaccessible. 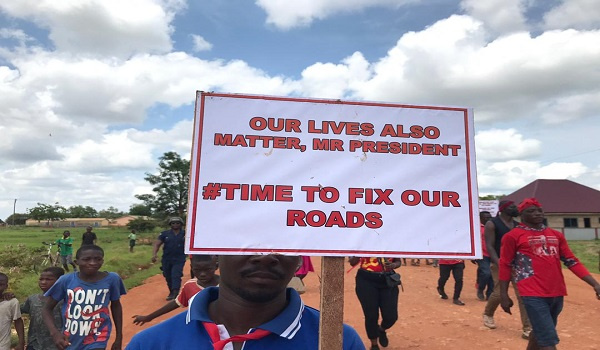 Apaabey John Peter reading the petition said, “The delay in fixing the road has caused low patronage in the Fumbisi and Sandema markets due to the lack of interest of drivers to ply their commercial vehicles on this road coupled with robbery activities.”

“Essential service providers such as medical doctors, Teachers, Nurses and other professionals refuse postings to the municipality and district assemblies due to the bad nature of the road”, he added.

The residents said the posture of the government towards road infrastructure in the area have painted a picture of neglect.

They stated that the government needed to intervene to curb the needless accidents related-deaths on the bad roads.

They, therefore, appealed to President Akufo-Addo to expedite efforts to see to it that the road is completed in fulfillment of his promise of good roads to the people of Buluk.

The District Chief Executive for Builsa South, Daniel Kwame Gariba, who received the petition, assured residents that road infrastructure in the area will be improved to aid mobility.

He said the Sandema – Fumbisi road, which has been of great concern to residents, will be completed in line with President Akufo-Addo’s vision to improve roads in the country.

The DCE stated that the Akufo-Addo government is the only government that has paid attention to the deplorable roads in the area and was working to improve them.

He, therefore, urged the residents to be calm as the District Assembly works closely with the appropriate authorities to address the pressing challenges the district was faced with.

Previous Here is what Michael Essien told Inaki Williams after he switched nationality to Ghana
Next Here is the CV of IMF’s lead negotiator, Carlo Sdralevich