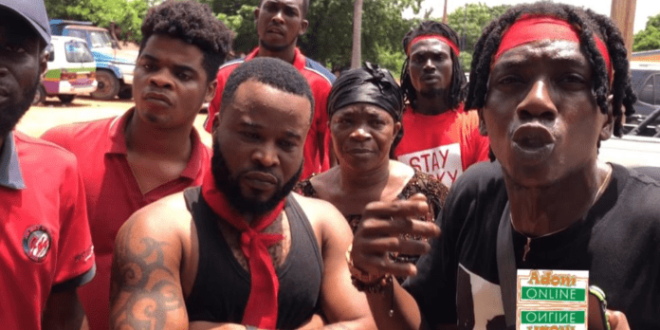 Some friends of the late tenant, Mr Benjamin Okyere, who was shot dead by his landlord at Ofankor have thronged the Mile 7 Police Station to demand for justice for their beloved brother.

One of them, Wedam Daniels, also known as Iyah, who led the charge told Adomonline.com that, for once we want to believe that the system works because I am grieved and having a heavy heart. [SIC]

The dead tenant per eyewitness account was allegedly shot four times by his landlord, Mr Victor Kamkam, after he served the former a notice to move out from his two-bedroom house.

After his arrest by the police, Mr Mamkam told the police he shot his tenant in self-defense.

In fact I was peeved. I think he didn’t understand what self-defence means. When you walk from your home premeditated with a fully-loaded gun with a bulletproof vest?

You only have to be threatened first to say self-defence. My friend wasn’t even aware that he was even coming. I was expecting the media to ask more questions.

We want justice to prevail. We know there is freedom and no justice in Ghana. We were at the court and the case has been adjourned to two weeks time. We want him to be jailed, he concluded.