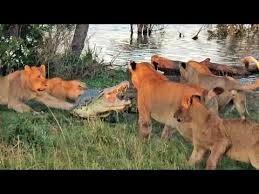 An incredible video of a crocodile in a scuffle with a pride of lions has just been released by popular wildlife website Latest Sightings, which shares videos captured by visitors to South Africa’s game reserves.

The crocodile was targeting the remains of a waterbuck that the lions had left behind. But it soon found itself surrounded by five lions, which started prodding him – until the crocodile finally snaps.

The video – taken before the national lockdown – was captured by Vernon Cresswell (61) at a dam in the private game reserve Sabi Sands, which borders the Kruger National Park.

Cresswell took the video while tracking a group of lions, known as the Talamati Pride. The lions took down a male waterbuck just a few hours before, and after feeding on it, left the carcass about 100m from the dam.

“A crocodile obviously sensed that there was a carcass nearby, so he left the water to investigate and maybe get an easy meal,” Cresswell recounts.

“When the croc got onto land, it was only a few metres from the waters’ edge. Some of the younger lions [9 cubs] showed some interest and moved closer to see what this creature was up to. After a little while, some of the adult females [5 in total] noticed what was happening and came to the scene.”

“At first, it seemed they toyed with the crocodile to test his reflex and speed. Soon after this toying, the crocodile let off a massive snap as it clenched its jaw.  The croc snapped his jaws at the lions in an attempt to defend itself. This caused the lions to launch a full-on mob at the crocodile.”

The lions seemed to be taken by surprise, but their reflexes were faster than the speed of the crocodile, and they soon got the upper hand. The crocodile sensed it has no chance and scurried back towards the water, finally disappearing into the dam.

“With the hippos snorting madly in the distance, we were amazed by the sighting, and we were excited to see how it would play out. We’ve been going to the bush regularly for 30 years, and not once have we seen something like this. Always anticipate what can happen, and put yourself in the right place and just be patient. Nature usually pays off!”

For those who miss the call of the wild during lockdown, many South African game reserves now offer virtual safaris, including Shamwari Private Game Reserve, which will take you on a game drive.

There are also livestream webcams available at SanParks reserves, and at other places around South Africa.

Since the lockdown, the roads are near empty in the Kruger National Park, which recently released pictures of a rarely-seen pride of lions caught napping on the hot tar.