Home / SPORTS / Local sports / WATCH: Colts football made our players popular, it has to come back – Andre Ayew 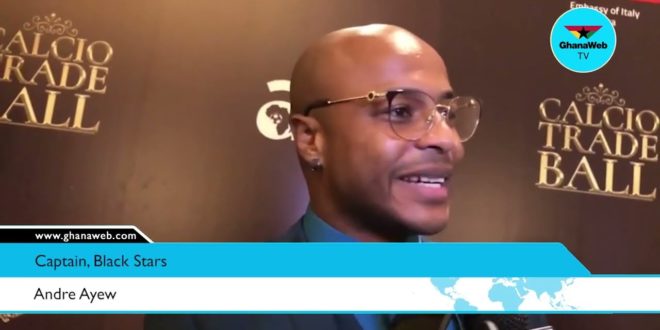 Black Stars Captain, Andre Dede Ayew has called for the return of juvenile/colts football in the country to help nurture more budding players for the national team.

According to him, though the Ghana Football Association is doing their best to revive juvenile football, there must be a conscious attempt to make it gain its popularity like previously since it was a means to an end for some.

Andre Ayew who was speaking at the Calcio Trade Ball noted that colts football was what made players like himself, Asamoah Gyan, Stephen Appiah and many other players popular before breaking into the national team.

“If you want to be honest, I played colt football in Ghana, Asamoah Gyan, Stephen Appiah all the big names played colts football, so I think we should acknowledge and realize that colts football is really important, it has to come back one way or the other,” Andre Ayew stated.

He added, “I think our FA is doing a great job, I know they are doing everything behind to make sure that this comes back to how it was before.

“For younger players to go out there and make money for themselves and family, you need to start from somewhere and if you can’t start from the colts it is very difficult,” the Black Stars captain said.

Ayew indicated that football academies which have sprung up in the country have swallowed colts football and juvenile players don’t get to be popular at their young age.

“In the past, if a player plays in the colts, he was famous already, you knew him. Today, you don’t know them because they are in the academy but I think is something we love,” he said.

Previous How Nana Aba Anamoah celebrated her 42nd birthday anniversary
Next People Thought I Was Mad as I Trained Cockroaches, But I Make Money by Selling It to The Chinese – A Man Narrates His Story