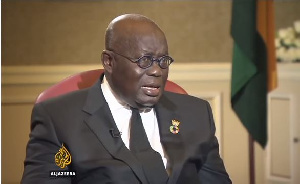 Share
Akufo-Addo floods the media with these foreign interviews

Akufo-Addo speaks as ECOWAS Chairman in some foreign interviews

Since he assumed the highest office of the land, President Nana Addo Dankwa Akufo-Addo has availed himself to the media on a number of occasions.

On the local front, he usually makes time to speak to some selected media outlets, especially during his campaign trail.

But asides from that, he has also been captured in a number of compelling foreign interviews, particularly the ones that made headlines back home.

In his first year in office, President Akufo-Addo sat with Al Jazeera’s Jane Dutton on a programme dubbed ‘Talk to Aljazeera’.

In an interview that covered Ghana’s democratic success in a continent filled with news of political instability, the president’s interview dominated the news for one subject.

President Akufo-Addo said the legilasation of same-sex marriage is not a topic of discussion under his government.

He however noted that the snowball effect for the recognition of homosexual rights will soon reach the continent and Ghana may not prove an exception.

“I don’t believe that in Ghana so far a sufficiently strong coalition has emerged which is having that impact of public opinion that will say, change it; let’s then have a new paradigm in Ghana,” he earlier said.

“At the moment, I don’t feel and I don’t see that in Ghana there is that strong current of opinion that is saying that this is something that we need even deal with. It is not so far a matter which is on the agenda,” he added.

In May 2021, President Akufo-Addo in an interview with CNN was questioned on the retirement of Ghana’s former Auditor General Mr. Daniel Yaw Domelevo.

In public discussions, it was argued that the former Auditor General was forced out of office by the sitting government for focusing his anti-graft lenses on them.

But Akufo-Addo insisted that his exit from office was within the confines of the law.

“There are laws in our country and the Auditor General, like me, should be some of the first to recognise the laws of our country,” the president answered in defence of the directive to Mr Domelevo to proceed on retirement.

“There’s a time for retiring which is prescribed by statute, not my making. If you are 60 years old, you are no longer supposed to be able to work in the public service. The Auditor General came to 60 years old and he had to retire,” President Akufo-Addo earlier stressed.

“And so the expression – and I say so with the greatest respect – of forcing out. . .he was not forced out of office. He left office by the operation of law,” he added.

In February 2022, President Akufo-Addo on the sidelines of an EU-African Union summit in Brussels, spoke to France 24 about the political instability witnessed in the West African Sub-Region.

The president in his capacity as Chairman of the ECOWAS heads of states maintained that some proposals outlined by the military in Mali to transfer power to a civilian government cannot be accepted.

According to him, a 12-month transition period is enough for the military to transfer power in the country which is one out of two others within the sub-region, stuck under military rule.

“Clearly, the proposal that has been put on the table by the Malian authority is unacceptable. My own feeling from talking to my peers is that a 12-month period would be an acceptable framework,” the president said.