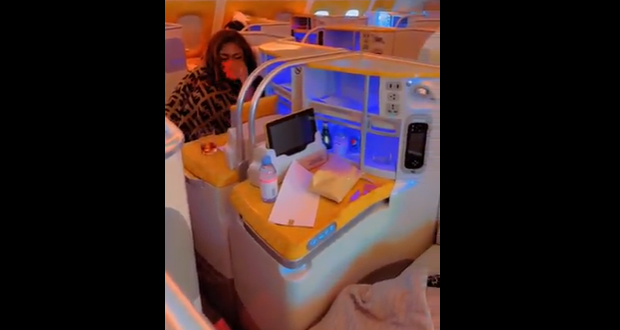 Tracey Boakye marked the beginning of December with a video highlighting the good life being enjoyed by herself and her family, who were onboard a plane to the United States.

The actress who tied the knot with Frank Badu Ntiamoah back in July of this year was experiencing the time of her life with the people who matter most to her.

What better way than to once again flaunt it on social media and also acknowledge God’s goodness?

Frank and the actress’s two children – Kwaku Danso Yahaya and Nhyira, were captured in Tracey’s Instagram video, which recorded over 92,000 views in less than 24 hours.

In a separate post, the actress, nicknamed ‘East Legon Landlady’ revealed that she also flew her children’s nanny to the US during their vacation

The video that had Nathaniel Bassey’s song ‘See What the Lord Has Done’ playing in the background was captioned: “Thank you Lord. Happy New Month Fam, from my Family to Yours. #usa.”