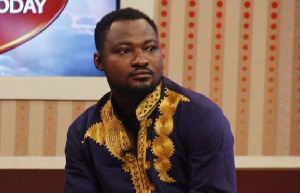 VIDEO: This is what ‘remorseful’ Funny Face said in his apology to the Ghana Police Service

To prove that he is indeed a changed man, Funny Face has rendered an apology to the Ghana Police Service for his misconduct towards them in recent times.

The comedian prior to his final arrest and confinement at the Accra Psychiatric hospital in several instances adopted the use of abusive words at the entire police service.

He has been captured in series of videos on social media uttering such unrefined statements.

But Funny Face who is back from rehab says he is deeply sorry for his misbehavior.

In a video which he shared on his social media pages, the actor was captured saying:

“I want to render an apology to ghana police service. From the IGP to the last constable. Especially the Kasoa Millenium police. I’m very sorry for the altercation I had with them. I’m really sorry for some of the words I used. Please find it in your heart to forgive me, I was going through a lot at that time. I accept the fact that I used some words that are not qualified enough to describe you. I’m really sorry,”

After being granted bail for firing a pump-action gun at a pub, Funny Face launched series of verbal attacks on the police particularly the Kasoa Millennium City branch.

The comedian who vowed to seek justice at all costs for what he described as been ‘brutalized’ while in custody, Funny was either seen threatening to deal with the police or using unprintable words against them.

In a similar instance, Funny Face drove all the way to the Kasoa Millennium City police station, rolled down his glass, and insulted their innocent mothers in the Akan language.

Previous HOT VIDEO: Kofi Adomah lifts busty lady’s breast in a pool during interview
Next I deserve a university outside Ghana – Kweku Flick