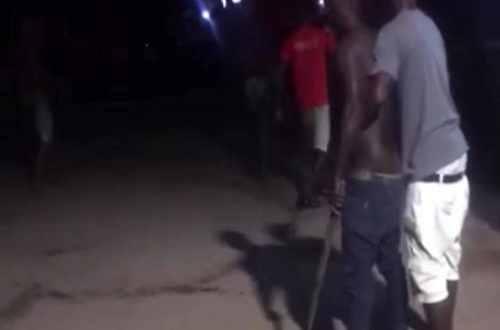 A thief has decided to carry out his operation in the vicinities of Teshie in Accra but luck eluded him, and he received the beatings of his life.

In the video shared on social media, it’s alleged that he wanted to break into someone’s room, but he was spotted.

The area boys after hearing about the noise came out to give him the beatings of his life. If not for the intervention of some concerned people, he would have been beaten to death.

This is unfair anyway. Ghanaians must learn the hard lesson of how jungle justice sadly ended the life of Captain Mahama a few years ago.

The right thing they could have done was hand him over to the police for the law to deal with him,