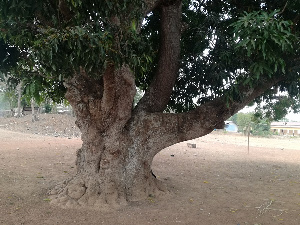 VIDEO: Story of the largest and oldest mango tree in Bono Region

A mango tree at Korase, a farming community in the Jaman North District of the Bono Region is regarded as the oldest mango tree in the region.

Data from the Ghana Statistical Service (GSS) indicates that it is also the biggest mango tree in the Bono Region.

Residents in the community claim that the record even transcends the country to the whole of West Africa.

Oral history in the community has it that the age-old mango tree which was planted over two hundred years ago is the mother of all mango trees in Ghana as all mango trees originated from the Korase mango tree.

Having survived over two centuries, the mango tree is still showing no sign of withering as it continues to blossom and bears fruits which are enjoyed by residents in the community.

A local historian, Opanin Yaw Badu who told the history behind the mango tree with the pouring of libation told GhanaWeb that the tree was planted in the community by some settlers from Techiman after they discovered the fruits from an unknown place.

Opanin Yaw Badu disclosed that even though the people were initially sceptical of the fruits, they planted the seeds after one of them consumed the mango and survived.

“What I can say about this mango tree is that it was planted over two hundred years ago. It was planted during the period when there were inter-tribal wars by some people from Techiman who once settled here. The fruit was picked by one of them from somewhere and the seed was later planted here after one of them ate it and survived. I cannot give an exact age for this tree but I can say that it is the oldest mango tree which gave birth to every mango tree in Ghana,” he told GhanaWeb.

He, however, decried the neglect of the place by political authorities who have on several occasions promised to turn the place into a befitting tourist attraction site though the place has been identified as one of the potential tourist sites in the region.