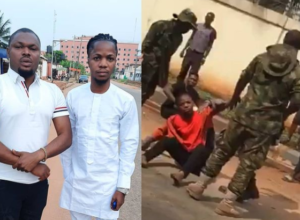 Activist Harrison Gwamnishu who shared the video of the assault, said the head of Civil Military Affairs, Maj. Gen. Bature confirmed the ‘arrest’ of the soldiers. He also revealed that he is pushing for the arrest of the Civil Defense officers involved in the incident.

JOINT PATROL TEAM ASSAULT A YOUTH IN ASABA.
As promised, we met with the 28-year-old victim who was brutally assaulted yesterday by Civil Defence Corps and Nigeria Army in Asaba.

The 28-year-old Godson is one among many young Nigerians who were harassed and humiliated by the joint patrol team. There have been several complaint of gross violation of Human Rights and impunity.

We will ensure all the officers involved are brought to book and no complaint of such Brutality is reported again.

While commending the security agencies for providing security, we won’t fail to keep our eyes on them and ensure they respect the rights of citizens.

All the Soldiers involved in brutal assault on Godson have been arrested and detained. The female soldiers inclusive.

The head of Civil Military Affairs, Maj. Gen. Bature has just confirmed the ‘arrest’ of the soldiers involved in this video.

We are also pushing for the arrest of the Civil Defense officers with them.

Please help us film them when the need arises. We will keep you anonymous and protect you till infinity.

Thanks to you all that shared the video and special thanks to Governor Ifeanyi Okowa.

Appreciation to @segalink for the support and phone calling the Authorities.
Behind Bars Team 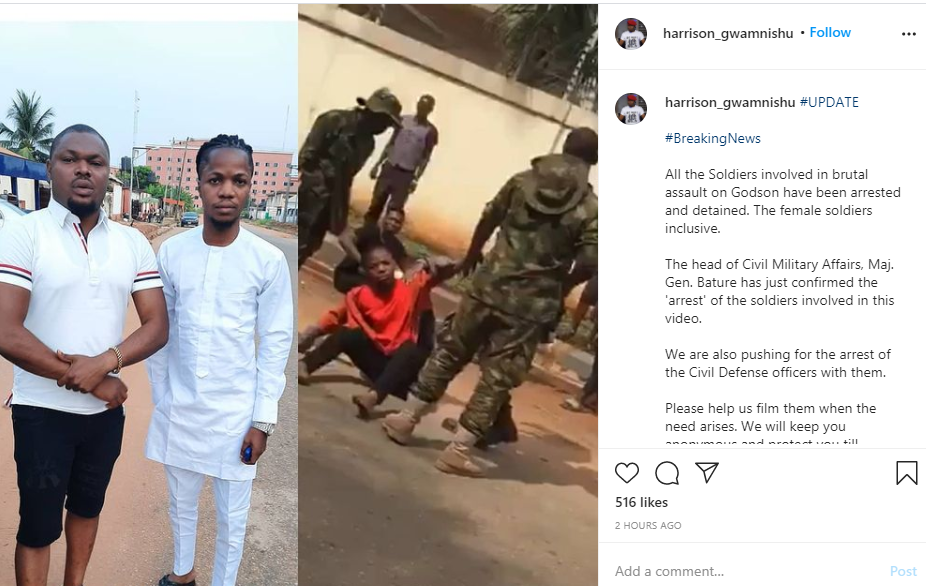