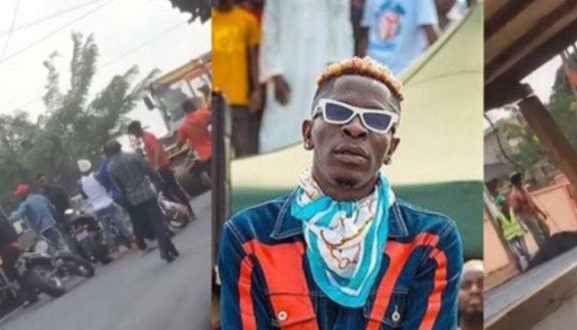 VIDEO: Shatta Wale leads gang to assault road Engineer for not extending road to his office 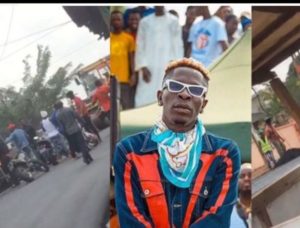 Dancehall musician Shatta Wale has allegedly led a gang to assault a supervisor at a road construction site at Adjiringanor in Accra for not extending the road to his office.

According to the engineer, Kennedy Acquah, Shatta Wale had on Saturday sent a delegation to workers on the site to ask them to extend the road to his office or have him to contend with.

“He sent someone to us on Saturday to tell us to extend the road to his office but we told them the length of the road and areas covered are contractual matters and not decided by the site workers. We asked them to pick the matter up with Urban roads who are supervising the project,” he told StarrFM.com.gh Monday.

He explained further “We were working today when he (Shatta Wale) just drove past the roadblock sign and came through where we were working despite the fact that we had just laid the asphalt, and asked who was in charge, I went close to tell him I was in charge and before I could explain anything, one of the guys with him just slapped me and he was looking on. There were a number of guys on motorbikes with him. The incident was captured on video by people passing, the police came there but did nothing about the assault on me, they rather exchanged pleasantries with him and told me to be careful”.

He has visited the hospital and heading to the Police station to file a formal complaint.

Attempts by Starrfm.com.gh to reach the musician for his side of the story have been unsuccessful. Some members of his team called by StarrFM.com.gh did not respond to their calls after numerous attempts.