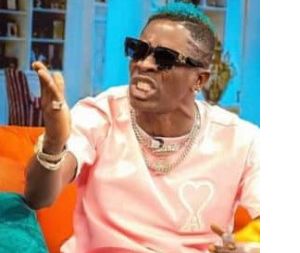 VIDEO: Shatta Wale angrily responds to critics over claims of abandoning his mother

Shatta Wale has descended heavily on critics following claims that he has deserted his mother.

Shatta’s rants were necessitated by public attacks over claims that he has blatantly refused to pay heed to his mother’s homeless situation.

Earlier, the dancehall artiste’s mother, Elsie Avemegah, took to social media to vent out her frustration after claims of being kicked out of her rented apartment.

Scores of individuals, including popular radio presenter, Michael Ola, after analysing the situation have voiced out various negative opinions and asked him to do the right thing.

But the Shatta Movement boss in a Facebook live video has asked his critics to mind their own business instead of interfering in his personal life.

According to Shatta, who is currently enjoying his music tour in the United States, nobody should dare teach him how to handle his mother’s situation or how to love her.

“Sometimes Ghanaians just want to tarnish your image. Ghana is already a foolish country, don’t make it any worse. If anybody fools he or she will be beaten. I have made it already, think about yourself. Some of you are telling me to go and rent for my mother, settle your family matters before you talk about mine. Don’t even talk shit about me because the moment you do, I won’t forgive you. I’m a gangster, I’m a crazy dude. If anyone tries to worry me, I’ll enter your anus like an ant. You are all fools.

“Shoutout to anyone supporting my hustle. To those who aren’t, your mothers! Think twice before talking about my mother. If you love your mother, just do that. Don’t come and teach me how to love my mother. Stop talking about me and focus on the village you’re living in. Its not everything I can talk about on social media,” he stated.

Previous Meet the powerful Black billionaires who once ruled the world before Aliko Dangote
Next As a responsible artiste, I gave birth to only 16 kids unlike others- KK Kabobo