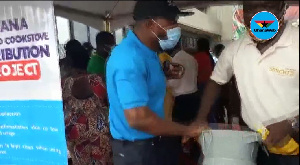 Not even the fear of contracting COVID-19 could prevent some individuals of a crowd gathered to witness the commissioning of the Kpong GS Retrofit Plant from scrambling for some improved cooking stoves meant for queen mothers at Manya, Akwamu and the Osudoku Traditional areas.

In a clear disregard for COVID-19 safety protocols, the crowd made up of NPP supporters, workers of some chiefs and queens as well as some students and teachers were seen scrambling to take hold of the cooking stoves.

Staff of the stove distribution project, could not stop the wild crowd as they were visibly overcome by the tug of individuals who yearned to also own one of the stoves.

During a ceremony held at Akuse in the Lower Manya Krobo Municipality of Eastern Region to launch the nationwide distribution of the cooking stoves and to commission the Kpong GS Retrofit Plant, both meant to sustain the use of clean energy in Ghana, over 200 cooking stoves were exhibited for the official launch by President Nana Addo Dankwa Akufo-Addo.

The President was to subsequently present or donate the energy-efficient stoves to chiefs and queens at the gathering for onward distribution to other traditional authorities within the Manga, Akwamu and the Osudoku areas.

However, just when the stoves were being distributed to the queens, the crowd at the commissioning ceremony pounced on the stoves parting away with any quantity their hands could hold onto as their share of the alotery.

Some of them could be seen engaging in a tug of war game with the staff of the stove distribution project who were unsuccessful in pulling the stove from them.

Launching the distribution of the stoves, President Akufo-Addo indicated that his government would continue to support renewable energy in Ghana as it had already taken steps to mitigate the impact of climate change by adopting the cleaner cooking solutions which included scaling up the use of LPG in all households.

He touted that his government had made significant progress in efforts towards rolling out the Liquified Petroleum Gas Circulation and Redistribution Module (LPGCRM) which would start soon.

“Since it will be difficult to have all households to use LPG in a short term, government has promoted the use of two million clean, improved and efficient wood fuel stoves as an interim measure,” he said.

According to the President, the 2million cooking stoves are expected to reach upto 350,000 households, stressing that with the funding coming from the government of South Korea, another set of 500,000 of the stoves are being developed for distribution to more households with the hope that about one million tons of carbon dioxide reduction would be achieved.

He also expressed optimism that the use of the wood fuel stoves coupled with government’s re-afforestation programmes have the potential to reduce the emission of carbon dioxide and rate of deforestation in the country.